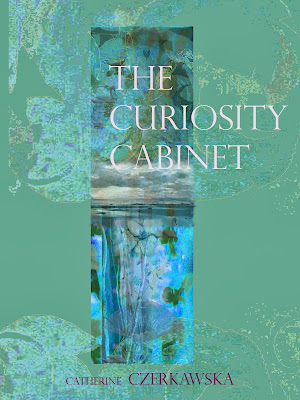 Earlier this week, a friend pointed out that my trilogy of plays, The Curiosity Cabinet, first written and produced for BBC Radio 4's Afternoon Theatre slot, some years ago, is due to be repeated on Radio 4 Extra on Wednesday, Thursday and Friday of this coming week, 2nd, 3rd and 4th of October. You can read more about the plays and broadcast times here.  There are three episodes: The Brown Swan, The Mute Swan and The Swan on the Lake.

If you've read this story as a novel (currently available on Amazon's Kindle Store, here in the UK and here in the USA ) you may be surprised to learn that it was first written in dramatic form. It's generally the other way round. Novels are 'dramatised' as plays. But way back when I first thought about this story, I was writing lots of drama for radio and theatre and that was how I first 'heard' it in my head - as a series of plays. The novel came later.

Actually the idea for The Curiosity Cabinet had been in my head for a long time, ever since I visited an Edinburgh museum and happened to read the story of Lady Grange who was kidnapped to a remote Scottish island at the instigation of her husband. Like so many writers, I began to think 'what if?' What would it be like for a young woman (younger that the real Lady Grange) to be snatched away from all she held dear, not knowing why, and then to find herself plunged into a completely different culture? For Gaelic and Lowland cultures were very different and still are to some extent. The Henrietta Dalrymple of my imagination could not even understand the language, could hardly make herself understood, even in her state of panic and desperation. This was how the story began to take shape in my mind, but my Henrietta is nothing like the real Lady Grange. The story is set at a different time. The plot is very different. And my fictional island is a bit like Gigha and a bit like Coll and could be any one of a number of small Scottish islands.

I always knew that somehow the historical story would be intertwined with a modern day tale. I just wasn't quite sure what that story would be.  You can hear the tale in its first incarnation in the radio version but I was never very happy with the present day part of the story. This was, I should point out, nobody's fault but mine. The production was excellent and as always with the wonderful Hamish Wilson in charge it was a very happy time. But I knew I was going to have to revisit the story itself, knew I wanted to do more with it. Felt that it wasn't quite doing what I wanted it to do.

When it came to the novel, the historical sections are pretty much the same but the modern day version changed a lot. I wrote the two stories separately, printed them out, and then did a literal cut and paste job of weaving them together, before replicating that on the PC. This was never going to be a real 'time slip' novel. That wasn't quite what I had in mind. My stories were always intentionally parallel. None of the characters move back and forth between past and present although the present day Alys (yes -  even her name was different in the novel version!) gradually becomes aware of Henrietta if only through some of her possessions. All the same, the stories are linked in subtle ways. This is a story about keeping secrets and learning to trust, about belonging, about motherhood and obligation. It's a story about the possibility of redeeming the past in the present. It's about the way small islands often seem to encompass past and present, layers of time, one overlain on another. It's a love story: not just the love between man and woman, but that between mother and child.

The novel was one of three books shortlisted for the Dundee Book Prize and was subsequently published by Polygon. It's well out of print, but you can still find the odd paperback copy on Amazon and there's also an unabridged audio version by Oakhill, beautifully read by Caroline Bonnyman. In due course, I'll bring out a new paperback version with CreateSpace.

There's another thing about the novel. Before I was a playwright and a novelist, I was a published poet (I know, I know. Couldn't settle to anything!) and I found myself pruning and polishing this book in much the same way as I used to work at my poems. But now, I'm not entirely sure it was the right thing to do. Sometimes, you can polish a little too much. There's a fine line between the simple and the facile. With later novels, I gave myself permission to prune less. But as ever, the trick is in knowing when enough is enough and I'm still learning!

Perhaps because of this, The Curiosity Cabinet has occasionally been called a 'bit of froth' and a 'guilty pleasure' at the same time as John Burnside was describing it a 'powerful story about love and obligation.' You pays your penny, as they say...  But of all the many very nice comments and reviews this book has received, (when readers like it, they like it a lot) the one that probably pleases me most is the US reviewer who remarked that the book is 'so tightly written you could bounce a quarter off of it.' That one made me very happy indeed!

I find it hard to listen to Radio 4 Extra, here in deepest rural Scotland. I can only get it on my television. But if you are around next week, why not give it a try? It's a lovely, evocative production and it may also give you some insight into how ideas can change and evolve - sometimes quite drastically - over time.