November 08, 2013
I wrote The Curiosity Cabinet a long time ago - in fact as I've already said elsewhere on this blog, it began life as a trilogy of radio plays inspired by the real historical story of Lady Grange (but very different from her story) and set on a small Scottish island a bit like my favourite Hebridean Island of Gigha. The plays involved two intertwined parallel love stories, one modern, one historical. But when I decided that I wasn't very happy with the modern day story in the plays, I started all over again with the novel. It was one of three books shortlisted for the Dundee Book Prize and it was subsequently published by Polygon. Lorraine Kelly read it and sent me a lovely note about it which I still treasure. Later, when it was out of print, I published it on Kindle myself, where it has been sellling very well ever since. It has had some fabulous reviews from readers here in the UK and in the US as well. My very favourite review was from a US reader who said that the writing was so tight you could 'bounce a quarter off of it.'

You know, as a poet and playwright as well as a novelist - not to mention as a reader too - I've never really subscribed to the notion that a book has to be over complicated and inaccessible in order to be good. I suppose what I'm always aiming for is an accessible and readable book which is nevertheless thought provoking. Some of my favourite writers - especially short story writers like William Trevor and Bernard MacLaverty - are clear and readable - but their work stays in your mind afterwards and works away like yeast, changing the way you think! That's always what I'm aiming for - but I know I don't always achieve it. And if you can read any of my books and say that you've enjoyed them, then that's good enough for me. 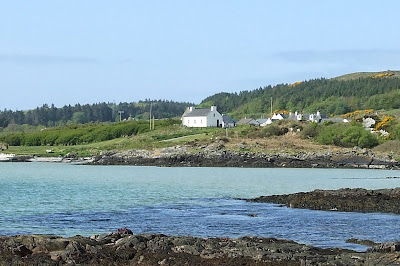 The landscapes of the Curiosity Cabinet were inspired by the wonderful little island of Gigha which I've been visiting for years. Even the ferry in the novel is very like the Gigha ferry.

As for the historical story - well, as far as I know, there is no Manus McNeill, sadly, though there were and still are lots of McNeills in the Western Isles and some of them may have been called Manus and may even have been a little like my lovely, irascible but honourable hero. But there is an ancient grave in the old ruined kirk at Kilchattan on Gigha and somehow, in my mind, I always associate it with my fictional Manus although I know that it's much older than the hero of my novel and even though it's nothing like the grave described in the book.

All the same, every single  time I visit the island, I go to the old kirk and leave a little posy of wild flowers on his grave. I can't explain why I feel the need to do this, but I do. 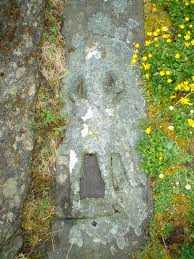 The Curiosity Cabinet is on special offer on Kindle now and for the next five days. You'll find it for 99p here on Amazon UK and also at a reduced price on Amazon.com in the US.

DawnTreader said…
Thanks for visiting my review of The Curiosity Cabinet! Nice surprise which led me to come here to your blog, which I'm looking forward to exploring a bit further!:)