November 08, 2016
It's national November novel writing month again. I'm not really taking part, even though I do have a new novel to write - well, actually, I have three - and I'll certainly be hustling to get that first draft of the first book onto the PC before Christmas.

If you're doing it, good luck. You're more than a quarter of the way through. If you're flagging, pick yourself up, dust yourself off and keep going.

I was thinking about this last weekend at a small gathering of friends, most of whom also happen to be writers. One of them asked me if I was disciplined and wrote at a set time each day.  To which the answer is, no, I don't. But I do try to write almost every day. And if I'm not writing, I'm thinking about writing, plotting and planning and getting to know my characters. But the truth is that some days, all kinds of other things get in the way. I find deadlines help. And when I have a fixed deadline, I find that my work rate escalates so that I might be writing for many hours in a day and half the night as well. Just not at the beginning. It all spirals upwards!

So why is this relevant to NaNoWriMo? Well, if you can do it, and stick to it, you'll get over the significant hurdle of the first draft, the horror of the blank screen. All writers work differently. Some of us are plotters and some pantsers - we write by the seat of our pants. That's me, more or less. I know the beginning and often the end, but a lot of the time I don't know how to get there. I write to find out. That's where the fascination lies. It's as though the characters have to tell me their story. On the few occasions where I've been persuaded to write more than two or three pages of a synopsis, I get bored and find myself writing something else. But not everyone works that way, and it's fine. We're all different.

However, I've tutored a lot of writers over the years and the single biggest problem for most them when it comes to making the leap from short fiction to novels, from one act plays to full scale dramas - seems to be in finishing the first draft of something so dauntingly long. The temptation to stop, revise, rewrite, change your mind, is almost overwhelming.

That's where something like NaNoWriMo comes in. My advice to most people starting out on a big project such as a novel, has always been to forge on. Don't worry if you find you have to leave gaps, miss out chapters, realise that there are gaping holes in the plot. Don't worry if you find yourself writing passages of what seems like gobbledegook. Just keep going, tell the story, get to the end. Nobody else is going to see this draft, warts and all unless you want them to. Nobody but me ever sees my first drafts.

But it's so much easier to revise and restructure a draft, however rough and ready, than it is to face the blank screen.

A couple of other useful tips.
Stop each day at a point where you really want to go on.  I wish I could remember who first told me this, because I bless them. That way, when you come back to the project the next day, and reread the last few pages, you'll get into the story a lot more quickly and easily than if you've stopped at a nice neat chapter ending.
The second thing to remember is that novels, like bread and beer and gardening, need time. Once you've got your first rough draft done, set it aside, don't be tempted to go back to it for several weeks. It's another reason why November is a good month for a first draft. You can enjoy Christmas with a clear conscience, and then get back to some serious editing in the New Year.

Good luck. And if you've any questions, add them to the comments and I'll do my best to answer them. 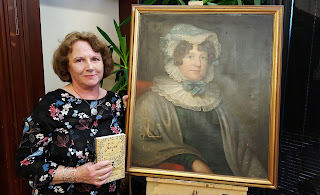 Rosie said…
Did you ever find out the story behind the scottish embroidered textile? I keep thinking about it...
November 26, 2016 3:47 pm

Catherine Czerkawska said…
Do you mean the beautiful christening cape? If so, no - I never found the real story. I have so many embroidered textiles through my hands - some I keep and some I sell! But I still have the cape.
November 27, 2016 10:11 am