January 05, 2017
Today, I found myself reading a piece in the Guardian about a somewhat curmudgeonly bookseller in North Yorkshire, who charges people to browse in his shop. Oddly enough, it made me think of my grandfather.

My nana and grandad lived in central Leeds. Next to their tall, narrow old house, they had a sweet and tobacconist's shop and my grandad had his own fishing tackle shop alongside it. Neither of these were what you might call large enterprises, but they kept the wolf from the door. I used to sit with grandad in there, watching him work, and no doubt distracting him, although he never once complained. We were a mutual admiration society of two. I loved him to bits and could wrap him around my little finger.

My Polish immigrant dad was working in a mill as a textile presser and studying at night school so that he could go on to get his degree, so the three of us, my parents and I, lived in a tiny two roomed flat above the shops. Money was very tight, although I can't say I ever noticed it, never went hungry, never went without anything I really needed.

I spent a lot of time with my grandparents, my aunt, who lived with them and, of course, my mum, who worked in the sweet shop.

But the thing that struck me most, reading about the Yorkshire bookseller, was that my dear grandad would have been perfectly capable of behaving in that way, because he could be - as we would have called it at the time - maungy.

Until that moment, I'd forgotten all about the word and it astonishes me because it was used quite frequently in my little world. 'Don't be maungy!' or 'She's maungy. She must be tired.' Along with the term 'past herself'. 'She's all maungy. She's past herself.'

It means stroppy, moody, generally fed up. When you're past yourself you're tired out and consequently quite likely to be maungy. Most children are.

Grandad Joe, much as I adored him, could be maungy on his own behalf. I never saw it. He was never maungy with me, which was - so I was told, many years later - a source of great wonder to his own children, who had occasionally seen the maungy side of him.

Somewhere, there's a picture of him. I've been hunting for it, but I can't find it. When I do, I'll post another piece about him. Meanwhile, there's me and my nana up at the top - and my dad, my mum and me below. These pictures look so 'historical' that they make me feel a wee bit old! Nice to remember though. 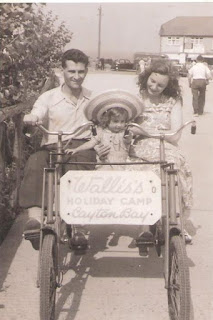