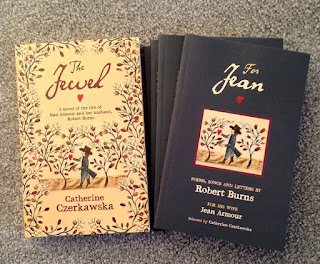 There was a lad was born in Kyle,
But whatna day o' whatna style,
I doubt it's hardly worth the while
To be sae nice wi Robin.

Our monarch's hindmost year but ane
Was five-and-twenty days begun,
'Twas then a blast o' Janwar' win'
Blew hansel in on Robin.
Robin was, &c.

The gossip keekit in his loof,
Quo' scho, "Wha lives will see the proof,
This waly boy will be nae coof:
I think we'll ca' him Robin."
Robin was, &c.

If you want to read a bit more of Burns's poetry,  you could do worse than get a copy of For Jean - poems and songs written for and about Jean Armour, the poet's wife - and also entertaining extracts from letters that the poet wrote about their relationship, especially when it was at its most dramatic. If you want to know the whole story, you'll find it in my novel, The Jewel. (Both volumes published by Saraband.) People keep asking me which bits of my novel are true, and it's always a pleasure to be able to tell them that most of it really happened, even the part about the poet's race with the highlander. It was on the shores of Loch Lomond and both wild men finished up in a hedge, bruised and battered, but none the worse for the experience.

Last night, I gave the Immortal Memory speech and toast, not of Robin, but of Jean herself. It was at a Jean Armour Event at the gorgeous Lochgreen House Hotel near Troon and it was organised by the Rotary Club of Troon. It was an exclusively female affair, apart from the waiters. No wild men at all,  and (if I dare say it) all the better for it: a wonderful, warm, generous talented bunch of women of all ages including young Becca Harris whose own 'wood note wild' was as beautiful as Jean's, and whose address to the haggis was the best I have ever heard.

But really, it was all good. I can't remember when I last enjoyed anything so much. I think Jean would have loved it too!
immortal memory. Jean Armour Lochgreen House Hotel poetry Robert Burns Rotary Club The Jewel