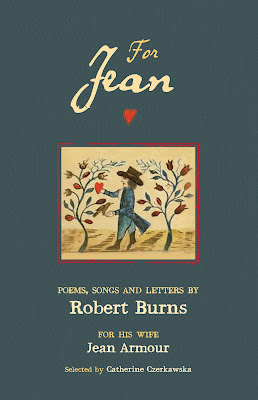 When I was researching and writing The Jewel, my new novel about Jean Armour, the wife of Robert Burns, I soon realised that there were a number of poems and songs that seem to have been either written for Jean, or at least with Jean in mind - and that nobody seemed to have collected them together in one place before.

Once or twice the poet even changed the name in the poem when he was feeling particularly hard done by, but it's clear from the rhyme and context that the words were intended for Jean.

Later this month, (just in time for Burns Night) Saraband will be publishing my little paperback selection of the poems, songs and letters written for or about Jean as a sort of companion volume to the Jewel. There are 31 poems, some illustrations and a series of fascinating extracts from the poet's letters telling the dramatic tale of his on/off relationship with his future wife. There are also a handful of letters written directly to Jean - extraordinarily loving and domestic. It seems clear to me that there may have been more of these personal letters that did not survive. Most of Burns's correspondents treasured their letters from the Bard, since he had become such a celebrity. For Jean, these were intimate little notes from her husband and she either didn't keep them or just possibly disposed of them before her death.

This is a small volume - only 90 pages long - but there is a glossary for each of the poems, as well as my explanatory notes about them and about how they fit into this most fascinating of love stories.

If you were wondering about the red roses on this blog, for January, it's because I'm firmly of the opinion that Red Red Rose was written for Jean. It's not just that it's a song about passionate and enduring love. There's something about young Jean herself - a striking brunette with vivid colouring - that may have reminded the poet of this most beautiful of blooms. And the 'till a' the seas gang dry, my dear' affirmation of love in Red Red Rose echoes lines he wrote earlier, very specifically for Jean, during what he calls 'the honeymoon'.

This is one of my all time favourite lyrics: 'O Were I on Parnassus Hill.' (Listen to it here, in a beautiful version by Ceolbeg)

'Tho I were doomed to wander on
Beyond the sea, beyond the sun,
Till my last weary sand was run,
Till then - and then I love thee.'

What woman wouldn't like to have such lines written for her?
Ayrshire For Jean Jean Armour poems Red Red Rose Robert Burns Saraband Scottish songs The Jewel