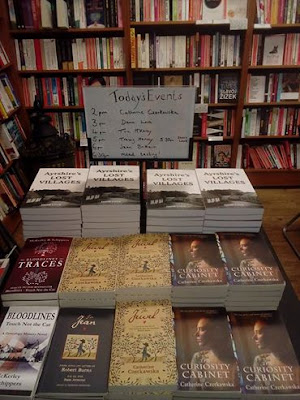 It always gives me a bit of a kick to see novels with my name on the cover in a book shop. It's the kind of thing you dream of, not just when you're starting out (although you do, of course!) but as you're soldiering on, perhaps with a few successes behind you, when you've hit a rough patch and can't see anyone ever wanting your work again.

The truth is that a career as a writer - probably a career in any of the arts - is a switchback. There will be a handful of people for whom it's a dizzying rise to sustained to fame and fortune and good for them. But for the vast majority of us, it's a game of snakes and ladders and just when you think you've made it up the final ladder, there's that huge snake - an anaconda surely - that takes you slithering down to the bottom of the board again. So although most of us expect everything to be kind of temporary, it's exhilarating to see that you're building up a certain volume of work and that people want to know about it. I don't think I'll ever get tired of that.

Incidentally, everyone thinks that seeing the very first printed copies will be the most thrilling thing about being published, but for me at any rate, it isn't. It's exciting, no doubt about it, but coming to the end of a big project is always a bit of a let-down until you get properly started on the next novel. And there's a sense in which the box of advance copies - although undoubtedly lovely to have and hold and show off to friends and relatives - isn't just as exciting as you think it will be. Maybe it was the very first time I was ever published. Maybe it's a feeling that you can never quite recapture, the novelty of it all.

But seeing your books in a bookshop - especially seeing quite a lot of your books in a bookshop - that is thrilling and brings home to you just how far you've come. A few weeks ago a friend posted a picture of her novel on a table of recommended fiction in another Scottish branch of Waterstones and there was The Jewel as well, keeping good company with all kinds of  'weel kent' writers - and that was even more thrilling. We shouldn't make these comparisons, but it's only human to do it.

Anyway, these heaps of my books were on show because Ayr Waterstones was having its own small festival of local history. There were events for children and events for adults. I was speaking about researching and writing historical fiction and I began by saying something about The Curiosity Cabinet, and what will be coming after. But because we were in Ayrshire, I was asked so many interesting questions about The Jewel, and Jean Armour, that I spent quite a bit of the time chatting about Jean and Rab as well. There was a good, receptive audience in a lovely intimate space and it was a pleasure to be there. It struck me afterwards what a warm and welcoming bookshop Ayr's Waterstones is. Friendly and knowledgeable people, nice cafe, excellent range of books. I know I would say that anyway, but it's true. If you don't believe me, go along and see for yourself!

Becca McCallum said…
It was lovely to see you there! Glad that you enjoyed your time at the festival. I know Hali wants to organise another heritage event in the summer too.
--Rebecca
April 20, 2017 5:21 pm