Another Inspirational Visit to the Isle of Gigha

One of the most inspirational places for my fiction and non fiction throughout my writing life has been and remains the tiny Isle of Gigha, off the Kintyre Peninsula - the most southerly of the true Hebridean islands.

Recently, we were there to celebrate a friend's sixtieth birthday, a nice mixture of old friends, relatives and grown-up children. Our son remarked that it was both a happy and a sad time, in a nostalgic kind of way, since this group of friends and their kids had been visiting the island on and off since they were small, and loved to paddle or dig for bait or fish for crabs from the catwalk in Ardminish Bay. Not that they don't still enjoy doing these things but there is something about the unalloyed pleasure you feel as a child that you can never quite recapture. 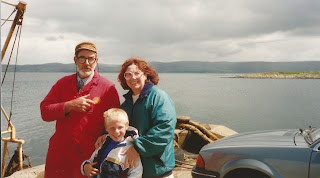 You can see what I mean from the picture on the left of myself in the big nineties specs, with the redoubtable Willie McSporran, and a very young and very blonde son.

At the bottom of this post, there's the same son, 6ft 4 inches and still dwarfed by the Gunnera plants in Achamore Gardens! 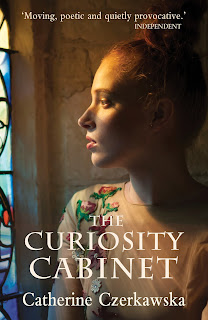 My novel The Curiosity Cabinet is set on a fictional island called Garve, a bit like Gigha. Actually, in my imagination, it's bigger than Gigha, but smaller than Islay and situated about where Jura lies! But it has a similar landscape and history: a smallish place with miles of rocky coastline and a fascinating history, softer than some places, an island full of flowers, with its fair share of trees, and gorgeous white sandy beaches.

'The island crouches long and hilly on her horizon, like some mysterious hump-backed animal. Already she can smell it, the scent that is somewhere between land and sea and has something of both in it. The island is full of flowers. Ashore, Alys knows that honeysuckle will clutter the hedgerows like clotted cream, weaving a dense tapestry with marching lines of purple foxgloves.'

When we were there, though, a week ago, the honeysuckle and foxgloves were not yet in bloom. It was all flag irises and bluebells and drifts of pink campion - the flowers of late spring that I love so much.

The gardens at Achamore House were also stunningly beautiful, but I think that's a subject for another post, one for the gardeners among my readers.

In case you're wondering why all this is relevant, it's because I'm deep into a new novel called The Posy Ring - and it's a kind of spin-off novel to The Curiosity Cabinet. It's not a sequel, because I didn't think a sequel would work. But it has a similar fictional island setting, a similar structure with past and present day parallel stories (although nobody actually goes back in time) and we meet some of the characters from that first novel all over again.

That was another reason why the visit to Gigha proved to be even more inspirational than it usually is. You'll have to watch this space for more news of The Posy Ring. I still have quite a lot of work to do!

gz said…
Islands can be inspirational..and a good place to get down to some work with fewer distractions!
June 01, 2017 4:29 pm