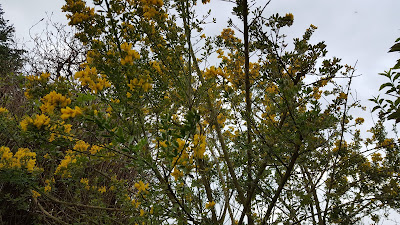 When I'm not writing, at the moment, I'm spending a lot of time in the garden. Still, the weeds are growing too fast for me to keep up to them, the ground elder in particular, which was seemingly introduced by the Romans (drat them) and is said to be edible. I haven't tried it, but it certainly smells lovely and I'll admit that I often leave bits of it to flower, because the blossoms are very pretty. I'm saying 'leave' but in reality, because it runs along under the ground, it's almost impossible to get rid of  it without resorting to weed killers, and I don't like them.

Anyway, in a cottage garden like mine, it doesn't seem to matter too much if there's a certain untidiness and wildness. Lots of shelter for the birds!

One of my favourite shrubs is this one, pictured above. Everyone thinks it's a forsythia, but it isn't. It's a Canary Island broom. I can't remember where I bought it, but it was a very small, thin plant and like everything else in this ancient garden it has grown into this robust monster! It seems to like it here. It flowers quite late in Ayrshire. This is it in full bright bloom, more or less at the same time as the dazzling 'whins' or gorse bushes, and the may blossoms, in all the country round about.

By the way, the old saying 'ne'er cast a clout till may be out' refers to the may or hawthorn blossoms and not the month. I'll post some pictures of them soon, when they're at their best. We have a big hawthorn in the hedge at the bottom of the garden.

I grew up knowing with absolute certainty that you should never bring these blossoms into your house. I suspect this belief came from my Irish nana, Honora Flynn. It was deemed to be unlucky. The reason for this may have been as prosaic as the fact that the heady scent attracts insects, but I think it much more likely that - as a tree often dedicated to the fairies, or 'good people' - you meddle with it at your peril. So you should admire, but don't chop. That's what my nana thought, anyway.

Meanwhile, the may is just coming into beautiful scented bloom here, so you can take off your winter woollies. Allegedly.

Becca McCallum said…
the hawthorn is beautiful in Ayr just now. I will admit to having hawthorn in the house just now, but in my defence it is from the trysting thorn as I went with a group of people from Alloway Burns Club to clear the brambles and prune the thorn as it was getting too large.
May 14, 2017 9:26 am