On this day, in 1796, Scottish poet Robert Burns, who had died only a few days earlier in his Dumfries home, was buried. He had struggled to return from Brow Well on the Solway, where he had been taking a 'water cure' that can only have hastened his end from acute endocarditis. Once home, he had to be 'oxtered' into the house, where he took to his bed and never left it again.

The funeral was a very grand affair at mid-day at St Michael's Kirkyard, in Dumfries. As a member of the Royal Dumfries Volunteers, he was given a military funeral, thus ignoring one of his last wishes. 'Don't let the awkward squad fire over me,' he had said, but they did it anyway.

While her husband was being buried, his wife Jean was giving birth to his last child, Maxwell.

I wrote about it in my novel: The Jewel, published by Saraband.


'On the morning of the funeral, before she could even dress, her pains began. It was clear that she could not leave the house. An hour after they had come to carry Rab away, her waters broke, streaming onto the stone floor. She went into labour and gave birth to his last son, Maxwell, on the same day. Few people perceived or even cared how terrible that was for her: to be in such pain and distress at that time. Jessie perhaps, although Jessie had no weans of her own yet. Mary Armour might have offered her some comfort, but Mary was in Fife and word had only just reached her. Rab's heartbroken mother would know what she was feeling. Nobody else. No man would have fully understood the darkness that engulfed her during the hours that she laboured for love of him on such a day.

Jean told only a few people that the night after the funeral, as she lay in their bed, wrapped up in blankets, aching for the warmth of her husband's body beside her, with the shape of his head in the pillow still, and a few dark hairs attached to it, he had come to her. The whole house was quiet, Maxwell swaddled in her arms. She had been singing to the new wean until he slept, and she saw Rab coming into the room. He was as bold and clear as though he had still been in life and, she thought, rather more healthy than the last time she had laid eyes on him, a gleam in his eye and a flush of sunlight on his cheek.

She was not afraid.

When had she ever been afraid of him except just that one time, in the stable, in the Back Causeway? Rather she felt the wee bubble of laughter that she had so often felt with him, laughter even in the most serious of situations, at the general absurdity of everything, even the very worst of things. She looked up at him while he gazed down at her and, in particular she thought, at the  baby. Well, why not? He had aye loved the weans best, loved the curve of their cheeks, the soft, vulnerable place at the back of the neck, their perfect wee fingers and toes. Then he shook his head sadly, as though regretting that he could not stay, and disappeared, so suddenly that it seemed like a snowflake, melting away in your hand.' 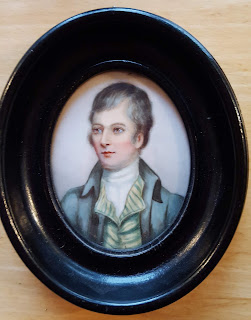