Of Water Horses and Other Worlds

Many people have heard of kelpies, mostly because of these spectacularly beautiful statues near Falkirk. What most people don't know though is that kelpies could be reasonably - albeit certainly not always - benign, or at least able to be controlled.

Back when I was very young, I briefly attended Brownies and among the sixers that pranced around the big plastic toadstool in the church hall were kelpies. I was a pixie. 'Here we are the jolly pixies, helping people when in fixes.' we sang. I think the kelpies were 'ready helpers'. A demonic and notoriously male water creature was perhaps not the best role model for little girls. Maybe that was why I ran away, hopped on the bus home and never went back. However, that's a story for another day.

Later on, I did a masters degree in Folk Life Studies and learned a bit more.

Essentially, the kelpie is a shape shifting 'water horse' inhabiting Scottish rivers and burns. They may seek human companionship, assuming the shape of an attractive black horse when out of the water, but you have to be wary of them, because they can also carry you to your death, if you're not careful!

The kelpie might be caught and harnessed, using a halter with the sign of the cross on it. As a last resort, 'cold iron' could kill it - as it could be the downfall of many other problematic supernatural creatures.

Occasionally, the kelpie might appear in the shape of a human being, but this is where the beliefs in these otherworldly creatures become confused and confusing, because while the kelpie can have a certain impish quality, the creature that you should never under any circumstances mess with, is the true water horse - the each uisge.

He is perilous indeed, this fiercest and most dangerous of the water horses. He lives in lochs or in the sea. He too may appear as a horse, on land, but will carry you off to the deepest part of the loch if once you so much as touch his mane. Even more dangerously, he can and all too often does appear in the shape of a handsome young man but when he rests his head in your lap, you'll find that he has sand in his hair. All in all, the each uisge does not get a good press.

But then, you come across old, old songs like this extraordinarily beautiful piece sung by Julie Fowlis: Dh’èirich mi moch, b' fheàrr nach do dh’èirich  in which the water horse turns out to be not so much the villain of the piece as the ... well, what is he? The abandoned lover? The heartbroken father? By any standards it's a deeply mysterious song, and I like things like that - things that challenge my view of the world.

It made me think. 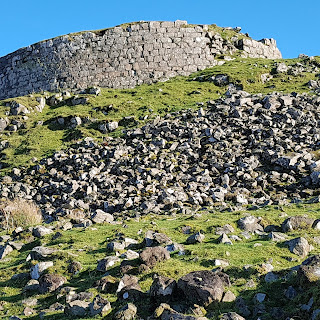 Late last October I did an event in Tarbert with my new book, A Proper Person to be Detained and while we were there, I also listened to an excellent talk about overland cycling, and remote bothies. It struck me that for a woman alone, staying in such places might involve at least a frisson of nerves. It would for me, anyway, even though I have friends who would be absolutely fine with it. After that, we headed for the Isle of Skye to visit friends there, and one day, I clambered up by myself to a well preserved Broch. It was a wild, lonely, evocative place, and that too made me think.

Sometimes people ask me 'where do you get your ideas from?' This is where I get my ideas from. All kinds of places, all kinds of experiences that somehow slot together into a piece of fiction. I don't know how it works, but some stories just have to be written.

When we got home, in the dreich space between the onset of winter and Christmas, all these threads somehow wove themselves together in my head, and I wrote a long story - so long that it almost became a novella - called Rewilding

At 17000 words, it was a bit too long for a a short story, but too short for a novel. It presented itself to me in diary form, in the voice of a young woman, who has a perilous encounter in a wild place.

Well, you can decide for yourself. It's free on Kindle for five days, from 25th July till 29th July. If you're too late for the bargain, it still isn't expensive. So give it a go. One of these days, I might write the sequel that's lurking in my head, like the water horse, only just out of sight.
But it might have to wait till winter.