The Deserving and the Undeserving Arts 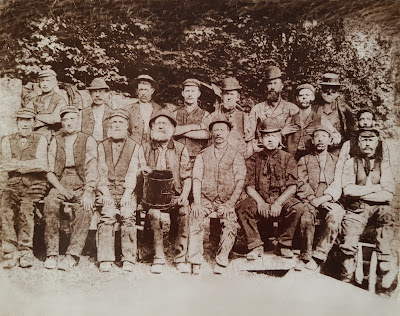 My deserving great grandad, next to the man with the tar barrel.
Back in Victorian Britain, if you were in desperate straits, you had to prove that you were one of the 'deserving' as opposed to the 'undeserving' poor. Heaven help you if you didn't tick the right boxes in terms of general worthiness and conformity with the values of the time, because your bum would be right out of the window and you'd be heading for the streets or more likely the workhouse because 'sleeping out' was illegal too.
When I was writing A Proper Person to be Detained, it struck me that there are now some correspondences between the deserving and the undeserving poor (at least some of my forebears would probably have been labelled undeserving) and the current state of the arts in this country, where professional creative people who find themselves down on their uppers can expect to get funding only if they are classed as 'deserving'. You have to tick all the right boxes in terms of the dreaded 'outcomes'. There have to be 'outcomes' and if these can be described by buzz words like 'community' and 'well-being' and 'inclusivity' and 'diversity', so much the better. We all have to do good, and prove that we're doing it.
I can hear the outraged counter-arguments even as I write this. 'Why do you think you should get any funding at all?' But this isn't a post about me. I've done pretty well out of funding support and I expect to carry on working hard at what I do for as long as I physically can. Also it should go without saying that those charged with distributing public funds should certainly make sure that those same funds aren't going to be frittered away on - say - a new kitchen or a holiday. If public money is being distributed, the public should surely get some benefit out of the results. (Wish our politicians would play by those rules though, don't you?) And yes, diversity and inclusivity are well worth supporting. All of this is true.
But not all worthwhile arts projects have obvious or measurable 'outcomes'. And therein lies one of the problems.
I once tutored a writing group in an area of social deprivation in a small Scottish town. It was a pleasure from start to finish. We were inclusive and diverse and I think we fostered a whole lot of well-being. But at some point in its long history, we were told we needed an 'outcome' in order for me to get the vanishingly small sum of money I'd been paid for doing it. And by 'outcome' they meant something that could be weighed and measured. 'People enjoy it,' didn't come into the equation. 'It's good for people's mental health' might have swung it, but how on earth do you measure that? We soldiered on, producing end of year anthologies for a while, but in a mixed group of writers of all ages and stages and literary forms, it was a thankless task. I eventually did it for nothing so that we could jettison the official demands but the wonderful group voluntarily decided to pay a little each week and gave me some cash so that I was never out of pocket with the travelling.
Over the years, when it comes to the arts, and the need for some kind of funding, I have come to believe that the bodies charged with distributing the cash should, in a good proportion of cases, focus less on 'outcomes' and more on the nebulous set of criteria that go to make up the kind of professional art or writing or music that can seldom if ever be defined in terms of stodgy dodgy box ticking.
Wonderful writing, as with every other art, comes straight out of nowhere and practically hits you between the eyes with its quality. It doesn't have to be opaque or difficult or snobbish. It can be as popular as you like, but you know it when you experience it and it can be life changing. And it's often art or music or writing that nobody would have predicted beforehand would prove to be so absorbing for so many people. Or as William Goldman says, 'nobody knows anything.'
Take Craig Mazin's extraordinary Chernobyl. Who could ever have predicted its success beforehand?
Chernobyl? Who would be interested in that? (Well, I would, but that's another story!) Besides, they would have said, Mazin writes comedy. And I doubt very much if it would have ticked any boxes at all about community involvement or well-being. Definitely not well-being. It might have slid under the funding wire with 'environment' of course. But that would have told you very little about the quality of the writing, the acting, the production, everything about it.
I don't pretend to know what the answer to this conundrum is, but I know it isn't what we've got right now. The power of professional arts to entertain and inform and enlighten and move and  - yes - to include is too often hedged around with constraints that seem to reduce those arts to very much less than they could be. Practitioners spend too much time jamming their fascinatingly diverse and imaginative projects into a set of uncomfortable one-size-fits-all holes.
Why are we surprised when what often emerges is deserving but irredeemably 'square'.
Arts funding workshops writers and writing. writers' groups writing advice writing business. writing inspiration writing submissions writing.