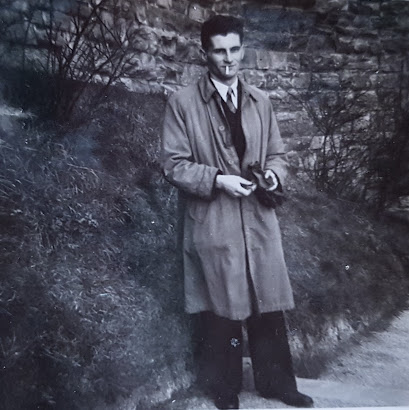 Throughout his life, here in the UK, people would occasionally ask my Polish dad about his experience of fascism. His country had been overrun and carved up between Stalin on one side and Hitler on the other. Most of his family and large numbers of his friends had died. He had been in a labour camp before coming to the UK as part of a Polish unit of the British army and stayed as a 'refugee alien'. You can read a bit more about him in my book A Proper Person to be Detained.

Throughout his life, he encountered a certain amount of prejudice, including in his career as a research scientist. He was the best qualified biochemist never to be promoted to head of department in the government institute where he worked, better qualified than most of his colleagues, holding a DSc, which is awarded only on career merit, as well as his PhD. Fortunately, his expertise was recognised before he retired when he spent a couple of years based in UNO City in Vienna, travelling the world as visiting expert in his field. My mother was Leeds Irish so she knew a bit about prejudice too. Somebody once asked her if she thought they should 'send all those Poles back where they belong now' - to which she responded that no, she didn't think so, because she had just married one.

My mum was a forthright, occasionally fiery person. Dad was more measured, wise and kindly. Dad had plenty of bitter experience of fascism and totalitarianism. But he would always say that it could happen anywhere and at any time, because nobody and no nation is ever immune.

How right he was.

Yesterday, a respected political commentator said that there was no point in getting angry over those Brits who were jeering and cheering over the death of a 16 year old Sudanese refugee - such people had already lost more than they would ever realise. He had a point. My dad might even have agreed with him. But all the same, if we do nothing, remain silent, aren't we complicit? My mum - never one to hold her tongue - might have favoured anger. She might well have been right too.

Fascism doesn't arrive proclaiming itself in song, like the people in that chillingly beautiful scene from Cabaret.  It creeps in slowly and insidiously, with the willing connivance of the media. It labels other human beings as 'not like us'. Once they are 'not like us', once we have othered them, we can attribute all kinds of vices to them. We can see them as potential threats to our safety. We can easily slide from thinking of them as the 'enemy' to thinking of them as 'not really human at all'.

The Daily Mail's moderated comments on the death of a sixteen year old included such gems as 'that's our kids safe from one of them' and 'one less we have to keep and pay for' and 'good enough for him' and 'cry me a river'. There were more, many more like that. Since first writing this, I've discovered that there are similar comments on Sky News, on the Metro site and elsewhere. If even half of them are bots or fake accounts, that still leaves plenty who aren't: people who actually typed the words 'cry me a river' about the untimely death of a young man whose entire life had probably been marked by hardship and horror. It's tempting to call these people inhuman but they are all too human. They walk among us. And our so called 'leaders' conspire in fostering the hatred - or at least do nothing to mediate it.

I don't know what the answer to any of this is. I'm not a politician. But it's on my mind right now, because I'm writing a book about the Polish grandfather I never knew, and his extraordinarily tragic story.

The truth is that history never repeats itself or at least nothing happens in the same way twice. All the same, if you have ever wondered what you might have done in pre-war Germany, in the years when Hitler was coming to power, you're probably doing it or something very much like it right now. Pretending that all is well. Hoping for the best. You might even have voted for him because you didn't much like the alternative, and he promised to restore prosperity, create civil order and make the country a world power once again.