The Beatles, The Brontes and Opinionated People. 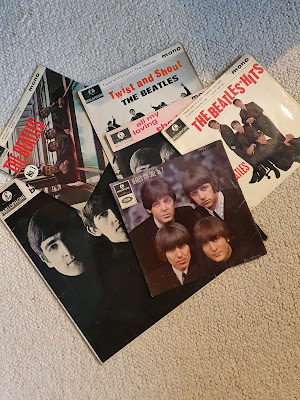 It's an odd feature of social media - I notice it particularly on Facebook, but I suspect Twitter is much worse - that when somebody posts an interesting conversation starter, and people weigh in with reminiscences and contributions and disagreements, some individual will occasionally add an opinion that simply amounts to 'you're wrong' - but often couched in much more robust terms. It happened recently, not to me, but to somebody else. It's so commonplace as to be instantly recognisable. I've deleted whole threads because of it - not because I dislike a good debate, but because I'm damned if somebody is coming onto my page to browbeat my friends. It is, let's face it, deliberately designed to do two things: draw attention to the person posting it, and close down any further debate. Like those exclamations in CAPITALS with FACT written after them.

This particular conversation was about the film A Hard Day's Night, and the music of the Beatles. It reminded me that I first saw the movie with my late mum. We had moved to Scotland a year or two before and the Beatles were my saviour during a time of intermittent misery. I loved Scotland, but hated my school. My mum and I went to see the film, and stayed in to watch it all over again.

Even at the time, and young as I was, it seemed extraordinary; it seemed utterly unlike anything we had ever seen before - and when you look at other British 1960s movies, you can see why it was so striking, both musically and visually. I didn't know why I found it so wonderful, I just knew that it was.

Many years later, I started to try to analyse why so many of us were so captivated and and why we remain so, watching it all over again. But because there's no point in trying to reinvent the wheel, here's a superb analysis from Colin Fleming in the Atlantic, from 2014, of The Deep Art of A Hard Day's Night.  'No band, maybe no artists ever, had a greater capacity for displaying and inducing wonder. And here we have that wonder made visual.'

As Fleming points out, citing reasons, this isn't just any old rock and roll film - it's a Dick Lester film. A Dick Lester film that manages to capture the magic that was the Beatles.

Pondering the phenomenon of the aggressive take down, though, it struck me that it existed long before social media. I remember a literary agent writing to tell me that one of my novels (this one, in fact) was 'a library novel fit only for housewives' He could just have said 'not for me, sorry' - but this grossly self entitled old man felt the need to take down a woman for writing a love story, while insulting other women and libraries along the way. What a tosspot. (More about this odd contempt for the love story as written by women in future posts.)

In a similar vein, I vividly remember a certain middle aged male Scottish writer telling me loudly and angrily that the Bronte sisters were 'a bunch of daft wee lassies, with a crush on Byron'. It was one of those occasions where you spend several days afterwards thinking of suitable rejoinders, but it also coloured what had, until then, been an amicable relationship. I had considered him a friend. Afterwards, I never felt the same way about him. It wasn't just his misogyny showing as clear as day. Of course he didn't have to enjoy the books. Not everyone does. And there were many arguments he could have made. But it was the way in which he thought that his opinion mattered far more than mine, and was - moreover - indisputably right. Nothing I said would have made any difference.

But sometimes the only response to an aggressive 'this is shit' is to shrug and walk away.

Which is fortunately, easier to do on Facebook than in real life.

Meanwhile, here's something to wake you up!