A little while ago, somebody on one of my online groups posted one of those jokey Brexity memes - a story about Churchill and Macron, the punchline of which implied that England won the war, single handed, while the rest of Europe simply surrendered.

It struck me even more offensively than it otherwise might, because I'm in the middle of researching my Polish grandfather's life story for a new book. His son, my father, had been in a Nazi labour camp, eventually coming to the UK as a refugee, via Italy, with the Polish II Corps. My grandfather, in the Polish army, had been arrested along with many of his countrymen and women and sent east, in his case to the notorious Kharkiv prison in the USSR, a place from which tales of torture and execution emanate, all of them so horrible that I can only read about them for a certain length of time.

I came away from the group. It was either that, or lose my temper, which would have upset other people and wouldn't have made any difference.

But I've thought about it a lot, since then: the whys and wherefores of it, and the way in which Brexit has spawned - or perhaps simply legitimised - a jingoism that seems largely without any foundation in reality, and that now goes hand in glove with a need to proclaim Britain's (aka England's) greatness at every opportunity. It isn't enough, apparently, to be merely competent or efficient. We have to be 'world beating' with the emphasis on that word 'beat'. It's an adult version of the language of the playground and I hate it.

Along with many - perhaps most - people who experienced the worst atrocities of WW2, my father seldom if ever spoke about that time. The kindest, wisest of men, he hated nobody. He would, however, have hated Brexit and all that inspired it. Before he died, too young, in 1995, he wrote down reminiscences of his childhood in the countryside near Lwow, now Lviv in the Ukraine. He had little to say about the war. Later, I learned more from other people, from books, and from his war record which referred to his internment in a Nazi labour camp, his time in the army in Italy, and his resettlement as a refugee in Leeds.

My beloved Yorkshire uncle George, who served in the Royal Navy and took part in the Atlantic convoys, never spoke about the war either. When I visited Warsaw, as a young woman, in the 1970s, I remember a friend of our Polish family taking me for a walk around the beautiful rebuilt old town and telling me quietly and unemotionally about the uprising in which he had taken part, about this or that friend who had died in this or that place, and about the ensuing destruction.

Two thoughts occurred to me as I pondered that thoughtless little joke. Mainland Britain has not, within living memory, been invaded. Not by a stronger and utterly ruthless force. Better, perhaps, to leave the Irish situation out of this for the moment. But the British people who like to scoff at those countries for their supposed 'surrender' have not the foggiest notion of the realities of invasion.

Moreover, those of us born in the years after the war, don't even know the reality experienced by our parents and grandparents, those who fought but also those who saw the full horror at first hand.

Because they didn't tell us.

Just like the soldiers who returned from the Trenches in WW1, none of them told us what it was really like. Partly because it was indescribably terrible, but partly because they needed to forget, to get on with their lives. Some, like my father, succeeded, but some didn't. Mostly I think they wanted to protect us, the loved ones who came after, the ones born into that brave new post war world. I can understand it, but now I'm no longer so sure that it was the right thing to do.

Instead, they welcomed the way in which post war Europe, flawed and difficult as the project might be, came together as a community, with the hope that future horrors could be avoided. Later, most people had few illusions about the Common Market and then the EU. Their eyes were wide open. But it was far better than the alternative. I think we have betrayed them.

To most of them, the real older generation, Brexit would have been unthinkable. My father loved his grandson very dearly, and he would have been nothing but proud of the fact that he considers himself to be a European, with friends from across the continent, including from Germany and Austria as, in fact, my father had himself.

We think we know about the war but we don't. We watch films, but no matter how good the writing, the acting, the direction, the very nature of film sanitises. We can and do read about it, but words and images slide away from us. We can put the book down, make another cup of coffee, give ourselves a shake and walk the dog. We can't feel the helpless terror.

Researching the background for my new book, I ran - as I am still running - eBay searches for photographs and ephemera from dad's part of the world. Much of what pops up consists of postcards of Lwow and other towns and cities of the region, mostly pre-war, some of them even older.

Every so often I'll find a run of photographs, real photographs, casual snapshots, taken perhaps by soldiers. Photographs from the 1930s and 40s. And they are photographs of horrors. Mass graves, people burying other people in icy conditions, hanged men and women, corpses, pictures of destruction, as though you had taken the pictures of the Blitz, wartime Liverpool, or Clydebank, terrible as they all were, and replicated them across the whole of the British isles, including every small town or rural village, not just with utter destruction, but with millions of dead, with trails of displaced people, starving, skeletal people, cold and diseased people transported thousands of miles, and pictures of casual cruelty, genocide, summary execution. Not for nothing were these called Bloodlands. I've even bought a handful of them when I thought they might be relevant to my own researches. I don't show them around though. I seldom even look at them myself.

So forgive me if I find glib jokes about how plucky little England saved Europe so deeply offensive. 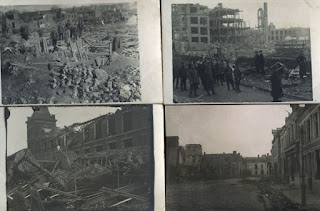