I'm reblogging this post - with a few changes - from 2016, when the Jewel, my novel about the poet's wife, Jean Armour, was first published by Saraband. After all, it's the right time of year, even if the only Burns Suppers we'll be attending will be online. I never thought I would miss book events as much as I do but I miss meals with friends even more, and that's what a Burns Supper is, after all - a meal with good friends. And poetry. And song. Mind you, it's probably my least favourite meal of the year, given that the only parts of the menu I like are the oatcakes and cheese at the end.

After many conversations about Jean and Robert Burns, with individuals and groups, I’ve realised that some misconceptions about the poet are still very much in existance. These are beliefs I thought had been disproved by more distinguished academics than me years ago.

So many people have repeated the notion that Burns was a drunkard. He wasn’t, but it goes back a long way. A mean spirited Dumfries draper called William Grierson attended his funeral and wrote that the poet was ‘of too easy and accommodating a temper, which often involved him in scenes of dissipation and intoxication, which by slow degrees impaired his health and at last totally ruined his constitution.’

Well, he was as fond of a drink as the next man, at a time when the next man often consumed a  prodigious amount of alcohol, the gentry even more than the poor. Partly this was because in the cities at least – less so in the countryside where many houses would have a well – fresh water was at a premium and it could be safer to drink ale, although ‘small ale’ contained very little alcohol.
Actually, Rab was probably less inclined to overindulge in hard liquor than most, although he certainly had his moments. But when you look at the body of work he produced, alongside a vast amount of clever, entertaining, thought provoking correspondence, as well as hard physical work, first as a farmer and then as an exciseman, riding some 200 miles each week, winter and summer alike – and being a loving father to a great number of children - you can see that the occasional spree is much more likely than any persistent problem.
He was a social drinker on high days and holidays. He also thought the odd ‘session’ contributed to his creativity, as perhaps it did. He was sometimes led astray by wealthy men who ought to have known better. And during his last grave illness, alcohol seems to have given him some slight relief, if only as a painkiller. But it wasn’t what killed him.

He didn’t die of the drink, and he didn’t die of consumption either. The evidence seems to point to a diagnosis of endocarditis: chronic, although not necessarily fatal, inflammation of the heart muscle. This would certainly have been a challenge to a constitution already weakened by rheumatic fever in his youth. Here too was a man who was involved in hard physical work in all weathers.
In Dumfries, his health already deteriorating, he developed a painful tooth abscess, and it’s now thought that the resulting massive infection could have been enough to trigger acute endocarditis. He became gravely ill, with all the symptoms of that painful condition, and died the following summer. During his last few weeks, with his illness exacerbated by the 'cure' of seabathing in the chilly waters of the Solway, he seems to have been able to eat nothing. Milk mixed with a little port wine was all that gave him any relief. But the ‘flying gout’ diagnosed by the doctors of the time was only a way of describing the dreadful widespread pains that must have beset his attenuated body during his last few weeks.

I’ve been asked more than once if I thought Rab was a violent man. Well, I reckon he was a lover not a fighter. Fond of fishing, he was no fan of shooting and once took a neighbour to task for wounding a hare on the borders of his land (and wrote a scathing poem about it afterwards). He loved his children and was happy to work with them playing around his feet. Not for him the retreat to the study and the writerly hush. He was by all accounts an indulgent father who appreciated a little mischief.
He was, nevertheless, a man of significant presence, physical and intellectual. He was a better friend than an enemy and was known to threaten to ‘skewer in verse’ anyone who overstepped the mark, like the Celtic bards of old. But his reputation was always for non-violence, for tolerance and good humour and there is no evidence that he was violent towards any of the women with whom he was associated.
Except for one notorious occasion.
Who knows just what went on with Jean in the stable in Mauchline when the couple were at their lowest ebb? Was it overwhelming passion or something verging on rape? We have Burns’s own version in a letter to a friend, bragging about a coupling he had persuaded himself Jean enjoyed as much as he did. But Rab was a chameleon and could write what he thought might most impress an individual correspondent. We would know nothing about this episode if the poet hadn’t chosen to brag about it himself.
We know that Jean was struggling with a mass of intractable emotional problems, not least a second unwanted pregnancy, and she went into labour very soon after the incident. She undoubtedly loved this man but she can't have been anything but shocked and hurt by his behaviour. We also sense that the poet was ashamed of himself, in spite of the bragging letter. He was the son of a highly moral father, and it seems significant to me that during this second pregnancy, with Rab in Edinburgh, Jean had taken refuge near Tarbolton with the family of Willie Muir, a friend of Burns senior, as much if not more than Rab and the Armours.
The tension between desire – theirs was clearly an intense mutual physical attraction – and Jean’s obvious vulnerability presented me with some problems as a novelist. All the same, I suspect my interpretation of events may be closer to the complicated truth than the poet’s version. May be closer to Jean's perception of it as well.
Finally we should remember that we are reading and writing about an 18th century man. Very different times, and not always comfortable to contemplate, but we can't rewrite history or historical attitudes to suit our own sensibilities. Laddish he may have been, but the term 'sex pest' belongs in 21st century tabloids.
For his time at least, the poet’s ability to project himself into the minds of the ‘lassies’ – to defend them and appreciate them and befriend them, older women as well as young  – is one of the things that most endeared him to me when I was writing the Jewel.
I suspect Jean loved him for it too. 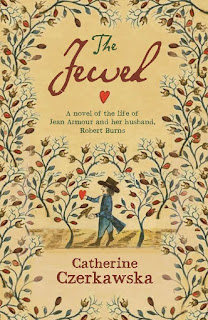