Three Cheers for Citizens of Nowhere - and My DNA Agrees. 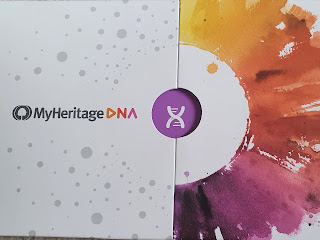 Back when ex British Prime Minister Teresa May called those of us who objected to Brexit 'Citizens of Nowhere' it struck a chord with many of us who saw it as a compliment rather than the insult she intended. I would still rather be a citizen of nowhere than a citizen of an increasingly xenophobic little island with delusions of empire. But I don't expect everyone to agree with me.

I've always felt that I didn't quite belong anywhere. Or - more accurately - that I belonged almost everywhere. So in Ireland, I felt Irish. In Poland, there seemed to be a significant part of me that responded to Polish culture, art, food, music - something quite viscerally Polish. Working in or visiting Scandinavia I felt at home. But this has, over the years, also made me feel oddly homeless. Or at least completely a-patriotic, if there is such a word. So when Mrs May hurled what she saw as an insult, I think many of us seized on the phrase with a sudden leap of joyful recognition. That's exactly what we are. Citizens of Nowhere.

Back in the early spring, a friend came along for a glass of wine or two in our garden. She had just had a DNA test from My Heritage (other sites and tests are available). She has a Scottish Italian background and the test had not only confirmed what she already knew, but identified a few other interesting elements to her DNA.

Reader, I tried it for myself.

Because I'm in the middle of researching and now deep into writing a new book about my Polish family background, The Last Lancer, I opened an account with My Heritage, and when a 'special offer' popped up on the site, I couldn't resist giving it a try. In due course the neat box arrived complete with the test kit: a couple of glass phials, swabs, an envelope and precise instructions.

Basically you have to swab your cheeks, put the business ends of the swabs in the phials, seal them and post them. I was a bit surprised to find that the packet was heading for Texas, complete with special customs stickers. My only advice to anyone who is about to send off their test would be to pay a little extra for track and trace. My packet spent weeks in the post.

However, just when I was despairing, I got the message that it had arrived. I could follow its progress through the various testing stages, until last week, the email I'd been waiting for dropped into my inbox: my DNA results were ready.

I already knew that I'm Irish, Polish and quite likely Scandinavian via my Yorkshire grandfather. If any of those were missing, I'd have been very sceptical. I needn't have worried. There were a few surprises but in fact most of them served to confirm things I had long suspected to be true - and the rest were fascinating.

I am: 35.4% Irish, Scottish and Welsh - which in my case almost certainly means Irish. My grandmother Honora was of Irish parentage on both sides, and those parents were Irish as well. I've written about that side of the family in a book called A Proper Person to be Detained.

I am 17.5% Eastern European. As the site says 'People of Eastern European descent trace their roots to Russia, Ukraine, Poland, and Hungary. The early Common Era saw the region largely populated by Slavic and Baltic tribes with later Roman, Mongol, and Ottoman invasions.' Not unexpected, given that my father's family, whose surname I still use, were from the Polish part of what is now the Ukraine and - as I've discovered in the course of my research - had been settled there for hundreds of years.
I am also 17.2% Ashkanazi Jewish, something that I had always suspected but never known for sure. Ashkanazi Jews originally migrated eastwards escaping persecution in Germany and France. They were a close knit group - but perhaps not so close knit as all that. My Polish grandmother's surname was Szapera, and although she came from a Polish Roman Catholic family, my father believed that the family had originated in Hungary. I had long wondered if at least some of those relatives may, at some point in their history, have been Jewish.
I'm 12.8% Scandinavian. So my big auburn haired grandad Joe, who came from a family of lead miners in Swaledale, almost certainly was, as we suspected, a genuine Viking, a descendent of those early settlers who arrived on our coasts and moved inland, leaving their place names and their DNA behind them and then staying in the Yorkshire Dales until the industrial revolution drove them towards the big cities of the North.
I'm 7.4% English. As the site explains, that might include people of Celtic descent too, those who were in England before the Anglo Saxons came along. More likely though, is that those Swaledale forebears who had moved to the big cities, married outside that narrow Dales demographic, where, as I discovered when I researched that side of the family some years ago, a single surname cropped up everywhere in a few small communities. A much needed stirring of the gene pool, I reckon.
There is 1.1% Baltic DNA in there, which might be expected, given the proximity of that region to Poland and the Ukraine.
There is 4.4% North African. I'm intrigued. But of course those Norsemen did a lot of trading with North Africa, and people from North Africa have migrated just about everywhere, over many hundreds of years, so perhaps it's no big surprise after all. It always irritates me that politicians and their complicit media talk about 'economic migration' as though it was somehow criminal. But it's how most of us got where we are today, including those very politicians who deride it.
Much less surprising is the 2.7% Central Asian, given the close trading and migration connections between Eastern Europe and Central Asia. Oddly enough, my Polish grandfather died in 1942 and is buried at Kenimech near Bukhara on the Silk Road, but that's a sad story for another day.
And finally there's 1.5% Nigerian, which is again hardly surprising with such an ancient culture - and may well be what many people worldwide find in their DNA as well.
So there you have it, as the chefs say, when presenting the audience with a well cooked dish.
Not only was the test pretty accurate, according to what I already know, but with a few intriguing surprises thrown in.
It also confirms what I have long suspected. I am a proud citizen of nowhere.
Or should that be 'of the human race'?
Oh, and mongrels are the greatest.

ancestry DNA family history genealogy heritage My Heritage Who am I? origins

Rosie said…
That makes me want to run out and do the same thing. There is a definite hushed up story concerning my ancestor Alfred Cox who had an illegitimate child with the Manners family of Belvoir Castle. I have a sneaky feeling I am not me at all....ha ha.
June 16, 2021 11:58 am

Unknown said…
Agreed! SO tempted to have ours done now. Thinking this could be a Christmas present
June 16, 2021 12:42 pm