Promoting Your Books on Social Media - Only Connect. 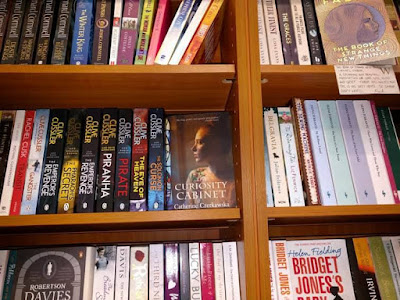 This is one of a series of occasional posts about the more practical aspects (or should that be pitfalls?) of writing and publishing.

For many years, I wrote for radio, TV and the theatre before turning to fiction and non-fiction. I'm traditionally published, but I also know something about self publishing, and have published several backlist titles and collections of short stories under my own imprint: Dyrock Publishing. I've taught creative and academic writing for years, from one off events to long courses. For most people, even after publication, discoverability* is the biggest problem.

How do people hear about your book?

This post has been gnawing away at me ever since I tried to say something about using social media on one of those big professional Zoom meetings, only to have a man interrupt me with such casual rudeness that I'm still irritated about it. Not just because of the rudeness, but because I could see a genuine need for advice in the group - and could see, moreover, that some people were going about it in the most counterproductive way.

The debate in this particular group turned to the use of social media for promotion: Facebook, Twitter, LinkedIn, Instagram, Goodreads and various other platforms. The variety is confusing, and the demographics of each platform tend to change over time. There's no point in me reinventing the wheel and trying to describe to you what each site does best. There's plenty of information out there already and the best advice I can give you is to set aside some time, and have a look for yourself.

One thing struck me about the debate though: so many people, in a meeting aimed at writing professionals, said that they 'didn't like social media'.

Now, that's fair enough. There are some social media sites with which I have a troubled relationship, in the sense that I find them not particularly user friendly. Or in one case, a bit of a bear pit. But you can't say that you want to learn how to promote your own work without spending at least some time engaging with one or more social media sites. If you feel so strongly about this dislike that you avoid them altogether, you're going to have to employ a publicist. There is a piece in this season's Society of Authors magazine, all about getting the most out of 'your publicist'. I found myself wondering just how many writers, even traditionally published writers, actually have them. Publishers do what they can, but publicity budgets are small, unless (paradoxically) you're so famous that you don't need the publicity. And if you're not famous to begin with, publicists don't come cheap.

The second thing that struck me about the debate was just how many professional writers seem to think that landing on - for argument's sake - Facebook, and plonking down 'buy my book' posts and nothing else, will make people want to buy the book. There is nothing more off-putting than the Facebook 'friend' who never engages with you, or anyone else, until - fanfare of trumpets - they have a book to sell.

So here's the big secret that is no secret at all.

If you're going to use a site like Facebook, and are hoping that at some point people will be interested enough to buy your books, you have to actually engage with those people.

It's fun. Some of them will be old friends you'd maybe lost touch with and that's a bonus. Some will be new friends. Some will be people you've met online and find that you like. Chat to them. Post photographs, Make them laugh. Make them cry. Let them admire your dog/cat/garden/recipe collection/model railway/full size Dalek made from egg boxes, or whatever else you love. Like their pictures. Reciprocate. Enter into debate.

Join a few groups, not just to promote your book, or even primarily to promote your book, but to meet like minded people and to contribute. You don't have to give your whole life history away and you don't have to spend hours on there. You just have to engage and enjoy it. Ask for research help if you need it. Facebook is wonderful for this and in my experience, people are generous with their expertise.

Then, if and when you have a new book coming out, some of these nice, interesting, witty people might be inclined to buy it. And if they don't, well, does it matter? It's the equivalent of a big, friendly book festival event, where there's a willing audience, whom you're happy to entertain, followed by a good question and answer session during which people often enlighten you, at the end of which, some of them will probably buy a copy of the book. Except that on social media, you don't need to wait for an invitation.

Dip a toe in the water. Find one or two social media platforms that suit you.  Facebook is good for books as well as all kinds of other interests, so if you want to start somewhere, that would be the one I'd recommend. But other platforms are available. Watch for a while. Chat about this and that. Post some pictures. And eventually, yes, talk about what you're writing. Because people will often be interested in whatever went into the creation of the book. I know I am, where other people's work is concerned.

Only connect, as E M Forster would have said.

*This word, discoverability, when used in a recent publishing trade journal, seemed to cause a good deal of angst among a few men on social media. They wasted a huge amount of time and effort, trying to denigrate it. Ironically enough by using very long words in opaque sentences, presumably to demonstrate the elegance of their prose. It's a perfectly good word. And if you're a serious writer, aiming for publication, you need to know about these things.