Apples - and a Recipe. 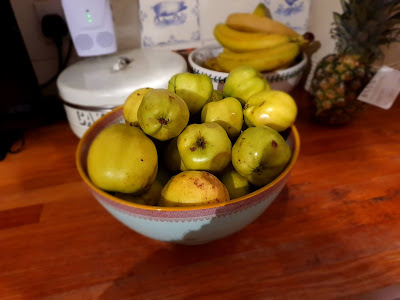 These are Golden Noble apples from the very old tree at the bottom of our garden. They're cooking apples, but much sweeter than Bramleys, so you don't need to add much sugar. The tree is so old that it's now on a two year cycle. It has a massive crop one year, and then rests up and has only a few the following year. The variety is old as well. As they ripen and mature, they turn a lovely golden colour.

This year was an apple year. We have made apple pies, apple crumbles and apple scones. We've frozen some for winter. We've given a lot of them away to friends. You're not allowed to leave the house without taking some apples. We've given the small windfalls to a friend with horses - they love them, seemingly. We don't spray the tree, so there are no chemicals on them. The wasps have had a good go at the remaining windfalls, and the birds are doing the same thing.

Now, most of them are gone, winter's on its way and I'm going to cook the last few. This isn't my favourite time of year. I love the colours that I can see from the window of the room where I work, but I hate the fading light, the way the nights draw in. The only positive thing is that it's easier to batten down the hatches and write. This year, in the sad old UK, with our energy prices rising to crazy levels, I'll be writing all wrapped up in woollies and socks and blankets, and hoping for a less chilly winter. I've got my fiction to keep me warm.

Meanwhile, I make my scones with about 500 grams of self raising flour, a couple of teaspoons of baking powder, a walnut sized lump of butter rubbed in, as many peeled apples as you like chopped into the mixture (lots) and a tablespoonful of sugar. I mix them with home made kefir, but if you haven't got that, buttermilk, or a big dollop of Greek yoghurt mixed with milk, or sour milk - all these will do. I like to add some vanilla essence, but you might prefer cinnamon. Your scone dough should be very soft - just not quite sticky. Better sticky than too dry though. Form into two rounds on a well greased baking tray, make a cross in the middle so that you can pull them apart later, and bake in a medium to hot oven, (about 200C) until well risen, and cooked all through. If you're baking them in big rounds like this, it's about half an hour. If you're making nice little scones, it'll be more like 15 minutes. Cool on a baking tray and eat while they're still warm with lots of butter. They freeze well too.