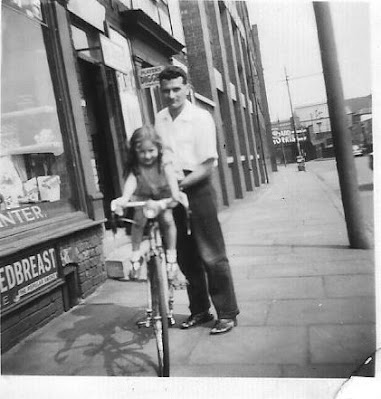 I've titled today's blog 'Stone Tape Experiences'. A long time ago there was a scary and highly original  television drama called The Stone Tape. You can read all about it here, and I think you can even find a copy of the drama online. When I first watched it, it terrified me. I went back to it more recently, and found it very much of its time, and less riveting than it had once been. The original thesis of the programme is still a fascinating one: that the stones of which a building is constructed can somehow retain images, scents, sounds of events that have taken place there - and that certain people can, in the right circumstances, 'play them back'. The twist at the end of the play is a very good one that still gives me a little frisson of horror - so I won't spoil it here. But I've had a few experiences myself that have made me wonder about so called 'residual haunting.'

When I was a very little girl, we lived in a tiny flat above my grandparents' two small shops in Leeds. You can see the shops in the picture above. That's me with my dad. One was a sweet and tobacconist shop that sold chocolate and cigarettes to nearby factory workers, and in the other my grandfather dealt in fishing tackle. My grandparents lived next door, just out of shot of that photograph, in a tall thin house with a back yard. You can find out a lot more about that time and place in my book A Proper Person to be Detained, about a murder in my family in 1881, and its aftermath. The story of the murder recently featured in A House Through Time.

I was often ill with asthma as a young child because there was massive industrial pollution from the printing company next door. I spent a lot of time at home, in bed, wheezing. Treatments weren't nearly as effective as they are today. But I used to have vivid dreams, and one of my dreams was both recurring and oddly comforting. I used to dream about three people, sitting around a table in the window of what was effectively our living room and kitchen combined, playing cards. The flat was cramped and we seldom had visitors. Any family get-togethers were held in my grandparents' house next door.

As far as I remember, there were two women and a man. I was vaguely aware that they were dressed in dark, very plain clothes. But they were my talisman. I often had bizarre and disturbing fever-induced dreams, but even in my dreams, I knew that if I could see the 'people at the table', the nightmares would fade and normality would resume. I could and did deliberately invoke them. They were never aware of my presence. They were just there, enjoying a quiet time together. And whenever I saw them, any nightmare simply faded away.

I thought nothing of this, assuming that it was part of my very active imagination, until many years later, when I told my mum about it. She looked taken aback. 'But they were real,' she said. She went on to explain that when she was a child, back in the 1920s, and even earlier than that, the small flat had been rented to a family of two sisters and a brother, who had habitually sat at the table in the window and played cards. She barely remembered them herself, working people of my grandmother's generation, and she had certainly never mentioned them to me - but I still think about them affectionately, even now.

Two more stone tape experiences occur to me. One was during a holiday with friends in an old castle in beautiful West Cork, where we had an apartment divided from the rest of the castle by a solid partition, with no door through.  One of our party - quite young at the time - came down for breakfast in the morning and wondered 'who was the man standing in the corridor in the night?' We were in an adjoining bedroom, and had seen her get up to cross to the bathroom, pause, and gaze along the corridor. There was nobody there. Or nobody that we could see, anyway...

Finally, another friend went back to her childhood home in a small Scottish town, and, invited in by the current owners, was delighted to be able to have a look around. 'We love the house' they said. 'But tell me, when you lived here, did you ever hear the sound of a musical box playing and a dog howling? Because we sometimes hear it at the bend in the stairs.'

She had to confess, somewhat shamefacedly, that during her childhood, there had been an old musical box just at the bend in the stairs. It made the dog howl. So, kids being what they are, they had occasionally played it, just to upset the poor dog. No ghosts were involved, unless you count the dog - but it did seem very much as though the old stones of the house had somehow absorbed the sounds and in certain atmospheric conditions, played them back for the current residents.

Rosie said…
I am a firm believer that stones can store sounds, images and emotions. I see them as a type of battery which certain people can tune into.
October 27, 2021 10:34 am

spabbygirl said…
How fascinating!!! I can quite easily see things that have passed. Elizabeth Chadwick makes great use of it in her writing via a 3rd party, Alison King, its called the akashic records.