Guest Post: A Career in the Video Games Industry 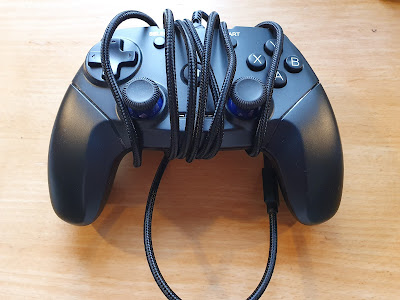 I don't normally have guest posts on here. It's not that sort of blog. But I make an occasional exception - and what better exception than a post from my professional video game designer son? I'm hosting this post because I know that it's a dream job for many young people. The industry itself, worth some $180 billion worldwide, is developing and changing at speed, but for anyone looking for advice about getting into the industry, this is a good starting point.
A Career in the Video Games Industry
In the eyes of many, a career in game development is seen as the holy grail of working life. Video games are a fascinating and rapidly evolving entertainment medium, and by their very nature, are a special blend of technology and art, the likes of which is encountered in few other areas of creative work. As a result of this, I firmly believe there is something for everyone within the video game medium, extending from simply enjoying playing games to a variety of career opportunities within the industry, not all of which will be recognized by careers advisors.

The focus of this post will be one of the most sought after roles: the game designer. It is often a misunderstood role, and is notoriously ambiguous and challenging in terms of finding an entry point. In all honesty, a little luck is needed to enter the industry as a designer: being in the right place at the right time for the stars to align. However, for anyone genuinely interested, I'll go through some of the pragmatic things you can do at different stages of life and education to swing the odds in your favour.

One major caveat is that the design role will vary somewhat from company to company, but in general, you can think of designers as essentially architects for the games. Designers come up with the rules and create the experience a player will have when playing a game. This differs from programmers, who are actually coding the tangible product or ‘things players do’ (e.g. mechanics like shooting a gun), and artists who are creating the perceptible visuals (e.g. environments and characters) that players will see in the game. Game designers are working ‘between’ programming and art disciplines to craft the player’s enjoyment.

Design work typically involves documentation, spreadsheets, and special software tools, along with open communication between the various disciplines. This ability to communicate is important. There are different sub-specialities within the broad scope of design, and of course differences between how various companies approach the role. To name a few, there are narrative designers who create the story, system designers who work on various features such as combat, and my own speciality, which is economy design. This involves working on those aspects of the game concerned with the long term progression and engagement of a player. There is also level design, which is often seen as a separate branch of design. Level designers use special software to physically lay out game environments and create the actual minute-to-minute experience for the players.

Despite the various specialisations, members of a design team will work closely together, with overlap in the work, so it is important to keep an open mind, and enjoy a working environment where no two days are the same.

At this early stage, even if you see yourself as a game designer in the future, one of the most important things you can do is to keep your options open! I can’t stress this enough. You never know what you'll end up truly enjoying or being good at. Despite this, you will likely gravitate towards science or art, so if you’re technically minded, consider subjects like Maths, Physics and Computer Science. If you are more arty, then naturally you'll choose Art but try not to abandon the STEM subjects entirely, because a working knowledge of some of them will help. The key is versatility.

If choosing school subjects is proving challenging, the general guide of sticking to the core traditional academic subjects at this early stage will put you in a strong position for a future career in games: Maths, English, Physics, History, Computer Science, Business Management, etc. are all helpful.

As a young teenager, there can be occasional opportunities to take short (week long) placements at game companies. This is something to go for if you have the chance. Even if this is not an official part of school, don’t hesitate to approach game companies and politely enquire about any opportunities they may have. Some companies see this as part of their outreach programme, so you may be lucky. Always make your approach personal and courteous. Never send out group emails to different companies at the same time. The scattershot approach just irritates the recipients.

Outside of school, it will be helpful to try to make games in your spare time. This can be tricky, as making a full game requires many different skills (which is really the whole point of this post!), not to mention expensive high-powered software. However, there are many more options out there. Try downloading software such as GameMaker, and see what you can put together. Maybe you can also take the chance to team up with a few other like minded people to create something original.
Stage 2: Higher Education

Although you will hear of exceptions, 95% of the time you will need to be educated to degree level to enter the games industry (with the exception of QA, see below) and sometimes to postgraduate Masters level.

Choosing where to apply for your higher education will present an important but tricky choice. Nowadays, there are very good degree courses specifically for game design. In Scotland, Abertay University in Dundee is a top place for computer games degree courses but there are plenty of others, worldwide. These courses do put people on the correct path to join the games industry, and if you are dead set on a career in games, across any discipline, then you should seriously consider one of them. However, you should also bear in mind that if you suddenly decide half way through such a course that it’s not for you, then choosing an institution where it’s possible to switch or perhaps just tweak your course options might be no bad thing.

If doing a dedicated game related degree is not feasible, or you are potentially unsure about what role you want, then getting a good degree in a core academic discipline will serve you very well. Look at English, Maths, History, Physics, Computer Science, to name several solid choices. Many people do an initial core degree, work for a few years and then do a dedicated postgraduate video game Masters degree, once they have more certainty about what they want and need.

This is also the time when it would be valuable to try to get an internship in your chosen field, or a place at a company in the Quality Assurance (QA) testing department. Some of these roles are part time, so can be fitted around a degree. Some are full time jobs which will allow you to get valuable experience after graduation. It’s worth stressing here that QA is not ‘beta testing’ where individuals play an almost completed version of a game. It is an important and often tricky job within game development where you test games intensively, usually sections of games, finding and reporting bugs. It is generally, although not always, a junior job and you can sometimes get work with few or early stage qualifications. That said, it is a vital job, and good testing jobs at very well-known companies will naturally require some qualifications.
Stage 3: Entry Level Game Design Jobs

The catch-22 of requiring work experience to get work is common within the game design discipline, but there are ways around it. As mentioned above, QA is a very good place to start for many designers, even after becoming qualified to degree level. Many companies actively promote good QA testers into the design team. This is because QA testing will allow you to experience the complex realities of working on a game and that practical experience is invaluable.

Other junior design roles are available, but you will need to be persistent and enthusiastic about the industry you hope to enter. It should go without saying that if you are applying for a position, you should be very familiar with the company and the product. With little or no experience, you really will need to be able to demonstrate your design ability through some sort of tangible artefact such as a working game prototype. This is something that doing a game related degree will help you with, as you will certainly graduate with a portfolio of prototype game projects and some knowledge of working in teams. On the other hand, you will be investing years of time and money into studying, so don’t let it completely define your decisions.

In conclusion, a career in Game Design is a worthwhile, lifelong endeavour, so don’t be discouraged. For me, personally, studying mathematics at university level was by far the best option as a game economy designer although I also went on to study game development at Masters level. I knew roughly what I wanted to do, back then, but very little of the well-meaning advice I received as a teen reflected the rapidly evolving situation in the industry. It is certain that similar changes will happen for us all in the future. The best advice I can give is to love and play games, keep up with developments, study as broadly as you can, but prepare to be flexible, adjusting your goals as you learn more about what suits you as an individual within this extraordinary industry.