To Beta or not to Beta: That is the Question! 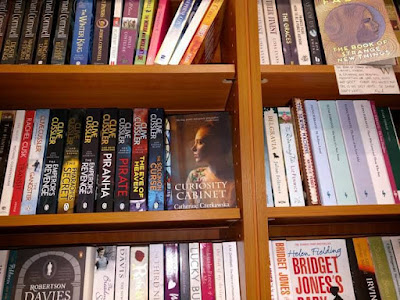 I've been working on a big research and writing project throughout Covid - a piece of narrative non-fiction that seems like a companion book to A Proper Person to be Detained.

The Last Lancer is about the Polish side of my family, especially the grandfather I never knew - his background, his milieu and what became of him. It's a good story but it was probably the most difficult thing I have ever had to research and write. I now have a draft that I can send to my publisher. It will need more work, but I'm at the stage where I've done a lot of revision, but I don't know whether it's good or bad or indifferent. What I need now is time and distance and a fresh pair of eyes.

When I was chatting about this on Facebook, somebody asked if I didn't use some kind of market research and let other people read it at this stage to judge the response. It's a fair question, because I know a number of writers who do just that and find it very useful. They call them Beta Readers, a select group of people who will give feedback on a reasonably early draft.

The term originates with Beta Testers in the video games industry, although it's worth pointing out that Beta Testers aren't there to shape or question the essential idea and structure of the game, nor even its development. That is done by teams of professionals. They are there to discover annoying glitches in the almost ready project, and their parallel in the world of publishing is probably a copy editor - somebody who spots all your silly mistakes, the punctuation glitches, the names that change, the infelicities, the repeated words and so on.

My gut response to that perfectly reasonable question was 'Noooo!' It surprised me that I had such a visceral reaction, but like many writers, I can hardly bear to talk in any detail about what I'm writing while I'm writing it, let alone allow anyone to read it. If I do that too soon, it so often melts away, like snow in sunshine, leaving a little puddle behind. I don't  even let my supportive husband read it at this stage. Not even when I've written it and done some revisions and have a decent early draft.

All the same, you reach a point where you are too close to the wood to see the trees. At that stage you need to hand the manuscript over to some trusted individual, an editor, a publisher, an agent if you have one.

I have many friends who are great readers, but I wouldn't want any of them to read an early draft of a book.

Beta Readers may work well and if they work for you, that's fine. Every writer is different. But they're not for me. Partly it may be that I've taught creative writing to mixed groups who critiqued each other. Often, with the best will in the world, and often without knowing they're doing it, people will critique a piece of work according to the way they would have written it themselves, and that isn't always what's needed. Sometimes, too, a reader and a book are just not a good fit. Nothing wrong with the reader but nothing wrong with the book either.

The other difficulty is that at this stage, too many different opinions may be problematic. One or two trusted professionals - that's fine. But even then, I've experienced two different agents reading the same novel and recommending that I remove a third of it. One was certain it should be the first third and one the last third. (I did neither although there were significant edits!) On another occasion, a young intern at an agency read a book called The Physic Garden, later beautifully published by Saraband, and said that it was 'just an old man telling his story'! I don't blame her. It simply wasn't for her. And it is a bit of a Marmite of a book. When people love it they really love it, but a few readers dislike the narrator (the old man telling his story) and tell me so. That's fine. He's crabbit. I'm very fond of him.

Then there was an early experience of a play developed over several weeks of rehearsal, about which - after a very successful production  - the director pointed out that I had been 'far too accommodating' with editorial suggestions. I should have fought more, he said and I think he was right.

I wouldn't use Beta Readers myself, although I would use an experienced editor, one who would ask all the right questions. But I'm old and wise enough (I hope) to  know what works for me.

Essentially, whatever works for you is good, but remember that not everyone will like your book or your characters. That doesn't necessarily mean that there's anything wrong with them.

Finally there is one bit of advice that may be useful. Beware of anyone attempting to rewrite for you. The best editors or directors or producers - in fact anyone who comments on your work - will never attempt to do this, although they may point out sentences or even paragraphs that are unclear or don't work effectively. What they will do is query and question you intensively, these days using Track Changes software, so that you can have an online conversation about the manuscript. The best editors will look at structural problems if there are any. Then they will hone in on those parts of the book or play that you have been most uncertain about - and there will be many uncertainties, if you're honest with yourself. He or she will ask the right difficult questions and in finding the answers to these questions, you'll make the piece of work better.

This is a difficult, professional job. Choose your help wisely.