Writing Advice: Getting the Details Right 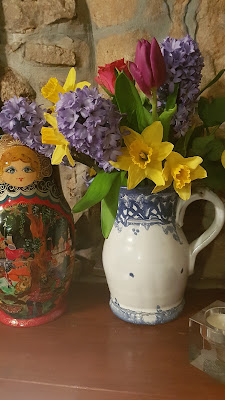 This isn't really a 'how to write' blog. But I've been writing in so many different media for so many years now, that occasionally things occur to me that may be useful for people who are just starting out on the long road to publication or production. I used to teach Creative Writing for various organisations, so I have a good idea of what works and what doesn't. For the New Year I've dug out my big folder of 'how to' notes and I'll be including an occasional post with what I hope may be useful advice. Some of it should be self evident - but isn't always.

I've been reading a contemporary thriller. I won't name it, even though it's a very good read. It fairly gallops along with plenty of surprises along the way, although less than half way through, I've guessed at least part of the ending. That, though, is more my problem than the writer's. The more you write yourself, the more you tend to be able to guess what's going to happen next.

No. The niggling irritation involved a garden.

The story is set in spring (I think) a warm late spring, in the South of England. The house has a big garden. Early on, we're told that it is full of wild garlic and lavender. Now, although wild garlic flowers and scents the air with its wonderful pungency through the spring of the year, it tends to be found more in ancient woodlands, bluebell woods in particular, flowering from April to June after which it is masked by other growth. By May, the scent of bluebells usually takes over. Lavender stays green throughout the year in mild climates, so that's fine. Although it wouldn't be all mixed up with the garlic. Later though, that same day, we're told that the garden is miraculously full of flowers including foxgloves, night-scented stock, hyacinth? As any gardener, even the most amateur among us, knows, your foxgloves and night scented stock are summer flowers. Hyacinths? Not so much. Not even bluebells if that's what's meant.

We all get details wrong. But it is this kind of precise detail that can pull the reader right out of the story, challenging her willing suspension of disbelief. On reflection, it's indicative of a wider problem, because I'm still not 100% sure at exactly what time of year the story is set. Sometimes it feels like summer but other details mean it must be spring. In which case, yay for the wild garlic and hyacinths. Not so much for the foxgloves and night scented stock.

It shouldn't matter at all. But it sort of does. It irritates, because this is a much lauded traditionally published novel and it's exactly the kind of thing that a good editor should immediately pick up on, writing 'flowers? time of year?' in Track Changes. Then perhaps even extrapolating from that a question about timescales, the when of the story. That's what good editors do. They pick up on the small things with wider implications. They ask the right questions and in finding the answers, you, the writer, make the piece of work better.

So much of writing involves finding exactly the right word. That goes for things as simple as garden flowers, as well as complex emotions. If you're not a gardener, then Google is your friend.