The Amber Heart - On Falling in Love with the Work 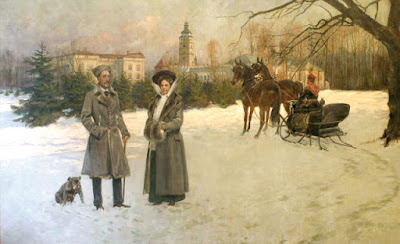 I went to Glasgow, the other day, to visit my literary agent in his rather nice new premises. Not for any specific reason, but just to touch base, meet up with a few of his other clients, and have a chat with him before he sets off to New York. He's currently promoting and hoping to sell my Polish historical novel, the Amber Heart, which has now been described as 'Anna Kareninesque'. I don't know whether to be delighted or alarmed by this. Is it praise indeed (well, yes, of course it is!) or a hostage to fortune? I know what they mean, though, even though I'm no Tolstoy. It's certainly a 'big' novel and an ambitious one, but not unmanageably big, not quite a doorstop of a book - just a big story. And although somebody else described it as epic, it isn't epic in the sense of covering a vast panoply of events. It is, in some ways, a saga in the Icelandic sense, a family story, a story of lifelong relationships, a story about a house and its inhabitants, and a tale of frustrated ambitions and divided loyalties, against a backdrop of a turbulent time and place - but the story of the relationships is, I suppose, more important than the politics of the time, although political events constantly impinge on the people who are trying to live through them.

But I have to admit that - quite without having an inflated sense of my own talents - I love this piece of work, which probably sounds strange to anyone except another writer. Most writers will understand the sensation of 'falling in love' with the work but I'm not sure other people do. So let me attempt to explain what I mean.

You have to accept that you will always have more ideas than time to write them. You will always begin more pieces of work than you will ever finish. It's allowed. You have to play, in order to explore. (Although if you constantly find yourself starting pieces of work which you never finish, you have to ask yourself if you're disciplined enough.) But most writers have a number of projects on the go at any one time. Often, you will set something aside, while you finish something else. Time will pass, and what seemed interesting or exciting, a year ago, will begin to seem stodgy, boring, thin and lifeless. So you let these things go.

Most of us are reluctant to bin anything, so you probably file it away and forget about it, although you may come back to it later. This is because most of us know from bitter experience that as soon as you throw away an old bundle of notes - or delete them irrevocably from your PC - some project comes up and you find yourself hunting wildly for the very material you've lost. But amid all these par-baked ideas, there will be a few that lodge somewhere in that part of your brain where your imagination lives, ideas that you will come back to, again and again. For me, The Amber Heart was one such, and it went through a number of less-than-satisfactory incarnations before it assumed its present shape. But I had to keep coming back to it because - quite simply - I fell in love with it. And I would venture to say that it's an essential part of the process.

You know that feeling, when you're in love, and you get that flutter of excitement in the pit of your stomach, whenever you so much as think about the object of your affections? The thought of the beloved invades your mind, gives you sleepless nights, affects your concentration. Moreover, when you are in love, you'll notice that the whole world is full of things which are of interest only insofar as they are relevant to the beloved. Well, it's the same with writing. Spooky coincidences will arise, probably because your attention is so focused on your current obsession, and all these things will give you the same fabulous flutter of excitement. I can feel it now, even as I type this, can access it just by thinking about the book. It reminds me of the way you fall in love with a new baby, and shouldn't be confused with the sense of being in love with your own hero or heroine - which is another, different aspect of the process. It's more all-embracing than that.  You become so emotionally entangled with the world of the work, that it's almost impossible to extricate yourself from it. In fact the only way is to replace it with a new affection, which may be the same love in a different guise.

None of which - of course - is to say that there isn't a great deal of wrestling with intractable chunks of text, because there is. Nothing, no amount of passion,  will replace the need for a very great deal of hard work, the sheer slog of getting it right. But it's the love that keeps you going while you do it. Just as the love for your baby sustains you through the sleepless nights and dirty nappies. And I would perhaps go so far as to say that if you don't feel that love for whatever you're working on, where fiction at least is concerned, you have to think very carefully about whether you're in the right job. I'm not sure that the same applies to non-fiction, but perhaps it does. I'd be interested to hear what other people think.

As for me, at the moment, I'm torn three ways. I'm still in love with the Amber Heart, still have it working away at the back of my mind, still get that little tingle of excitement whenever I think about it, even though it's ostensibly finished and out there, like a grown-up child, trying to make its way in the world. But I don't have empty nest syndrome because I have another historical novel called The Physic Garden, which is calling to me. I can hear it, it's nearly finished but I know that this was and still is an affair of the heart. And meanwhile,  I'm researching the sequel to The Amber Heart, a novel called The Winged Hussar, which will - no doubt - become the object of my obsessive affection for the next year or so. Whatever happens, it's going to be an emotional time!

margaret blake said…
I have everything crossed for the success of this novel. I am sure it will be well received by any publisher.Might even be a bidding war! Crumbs, wouldn't that be something.
May 15, 2011 1:45 pm

Catherine Czerkawska said…
Thanks, Margaret, it would be wonderful! But in the current climate, an interested publisher would be cause for wild celebration!x
May 15, 2011 1:55 pm