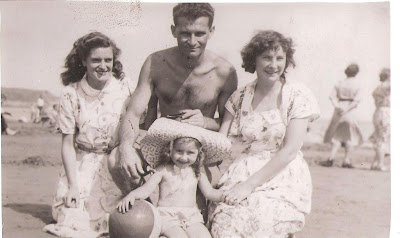 Today would have been my dad's 85th Birthday. That's him in the middle of the picture, with my mum, Kathleen on the right, my aunt Vera on the left, and me with the sunhat, in the middle. We're on a Yorkshire beach although I'm not sure if it's Scarborough or Bridlington. Dad died many years ago now, at the comparatively young age of 69 and I miss him still. So when I think about him, it's with a little pang of sadness. But he crammed so much into his life, was so interested in everything, so kindly and courteous, in spite of being formidably clever, that it's impossible to remember him without a smile as well.

Dad was born in 1926 in a place called Dziedzilow, in that part of Poland called Galicia, a little way to the east of the beautiful city then known as Lwow. His father, Wladyslaw, was a landowner, one of the Polish minor gentry known as the szlachta - fiercely proud, fiercely traditional, fiercely honourable. I had another wee smile a few days ago when I heard a TV commentator expressing horrified concern about a child being taught to ride at the age of three. Dad learned to ride before he could walk, and without a saddle too! It was expected!

His mother, Lucja, was a pretty but rather flighty city girl from Lwow. Wladyslaw was a handsome charmer- in the couple of photos I have of him, he looks a bit like Olivier, playing Max de Winter, in Rebecca. He was wealthy, tremendously generous and had one of the few cars in the district. She was enchanted by him. They married young, and it soon became clear that Lucja didn't much like the countryside. Perhaps she was bored by it. My father once confessed to me that he was more fond of his father than his mother - but who ever knows what goes on in a marriage? Wladyslaw can't have been an easy man to live with. In the event, they split up when Julian was nine or ten, and she moved back to Lwow with her son, although he would travel back and forth to Dziedzilow from time to time, to stay with his father.

The war, and all the horrors that beset this part of the world, disrupted Julian's life in unimaginable ways. But this is neither the time nor the place to relate such things - although my next novel, The Winged Hussar, will  be inspired by my grandfather and father's stories. The family lost everything including lives. Wladyslaw was imprisoned by the Russians, released when Joe Stalin changed sides, but died of typhus while still in his thirties. Julian worked as a courier for the resistance, was imprisoned, released, and eventually came to the UK via Italy, with a Polish unit of the British Army  - I have his 'tank' cap badge still.  Most of the rest of the family died in the war, including his Aunt Ludmilla, who died in Auschwitz, and a half sister who was executed by the Nazis for working with the resistance.

Dad was stationed at Helmsley in Yorkshire, demobbed as a 'refugee alien', worked as a 'textile presser' in a mill in Leeds, met and married my half Irish, half Yorkshire mum. Then, he went to night school. I remember him coming in, bringing his bike into the hallway of the flat where we lived in smoky Leeds, taking off his cycle clips. By the time he retired, he was a distinguished biochemist, had been working worldwide as visiting expert for UNIDO on projects sponsored by the IAEA in Vienna and had a double doctorate - not just a PhD, but a DSc as well.

Here was a man who - at a very young age - could easily have slipped into bitter self pity.  It would have been forgiveable. Instead, he was the most positive person I have ever known - a dad in a million. I can't ever remember him losing his temper. He was kindly, courteous and artistic as well as brilliantly scientific. He had immense patience and an enviable tolerance. Perhaps most important of all, he found everything interesting, would never dismiss anything out of hand, out of prejudice or entrenched views, but would investigate and explore. He indulged all my childhood interests and encouraged me to explore a hundred new things for myself. His God was education, and education, moreover, for its own sake, for the wonder of learning. He never worked in industry, where the big money was to be made, but he loved his work, passionately. He also loved hillwalking, painting, chess, music, Scottish country dancing, photography and local history. He was an active member of the local Civic Society. He made his own wine, and adored his garden, especially fruit and vegetable growing. In retirement, he started cooking, too!

When I think about him and my mum, there's a picture which always comes into my mind. When I was ten, dad spent a year at a research institute in Mill Hill in London and we went down to join him for most of the year. It was one of the hottest summers on record. Money must have been very tight, but the sun shone and dad organised expeditions here, there and everywhere, on a shoestring. We had no car, so it was all done by public transport. At that time Mill Hill was on the edge of the 'green belt' (maybe it still is! I've never been back) and we would often go for walks, the three of us together, through fields and woods. One day, we walked into a meadow full of butterflies: clouds of them. I don't remember what kind of butterflies they were, but I remember the three of us, running through this field in the sunlight, chasing butterflies which we never caught, collapsing on the grass from time to time,  laughing, and running again. It is one of the happiest memories of my life.

So, although I miss him still, I can't help but smile at the thought of him. And thank him again, for being - essentially - my hero. The best dad anyone could ever wish to have.

I hardly knew him, but I remember him with respect and affection fondness; he was a great man in his way.