Not An Easy Thing to Learn 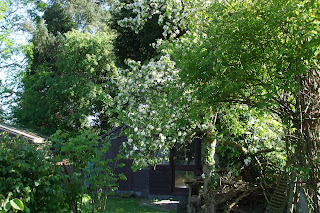 April was, in many ways, a peach of a month. The weather was good, the garden was (and still is) looking gorgeous, and my son's development team won a well deserved Creative Loop award for Best Video Game Concept at Glasgow's CCA. Professionally, though, it's been a mite frustrating for me.
Have been discussing ideas of professionalism with a number of colleagues recently but a conversation with a good friend who - before retirement - worked in IT, helped to concentrate my thoughts. He is busy enjoying himself in various interesting and challenging ways. We attended his 60th birthday celebration last year (he completed his final Munro, plus ALL the 'tops') and I gave him a copy of my book about the people and the history of Gigha, God's Islanders. A couple of weeks ago, as we sat out in the garden, over coffee, he told me how much he had enjoyed reading it, what a labour of love it must have been (it's a very big book about a very small island) and how much he liked my writing style, which he found easy to read, and engaging.
What, he wonders, am I working on now?
So I tell him the truth. My agent has two completed novels which I've been working on simultaneously and which he's hoping to sell: The Amber Heart, and The Summer Visitor. I'm focussing almost wholly on novels these days, although since these are mostly historical novels, I can imagine that there are a few related non- fiction topics which I'd like to tackle. I'm rewriting a third historical novel, called The Physic Garden, major rewrites which will take me another couple of months, but then I'll have three new novels. At the moment, nobody is paying me for anything, although I hope that's about to change!
So, he says, with interest, do you engage the services of an agent? I explain that I'm considered lucky to have an agent. They tend to 'engage' you. (And don't get me wrong - I AM lucky to have my agent, who is one of the good guys!) I see him raise his eyebrows a little. So, he says, when you have a track record, like you, when it's clear that you can write, that you can deliver the goods, that you are, in fact, a professional - why can't you or your agent approach publishers with the equivalent of a business proposal? Again, I try to explain that it doesn't work like that. Even if you do have a professional track record, you yourself can't approach anybody in a businesslike fashion, much as you would like to. Unfortunately, the very act of attempting to do this, will be seen as evidence of your amateur status.
But, Catherine, he presses on, if the marketing aspects of all this are vital, why couldn't you or your agent suggest various ideas to a publisher, and negotiate round those? Perhaps writing a few sample chapters? Once again, I have to explain than it doesn't quite work like that. Or only if you're a celebrity, when it does work like that, even if you have the writing abilities of a slug. Then, of course, even the 'few chapters' won't be necessary. Because slug or no, the celebrity who decides that he or she can write - for example - books for children, is already a brand. And even slugs, properly branded, can sell.
It's clear that our friend thinks I'm a professional, in the same way that he's a professional - and, of course, I am. But it is also becoming clear to me that - across all the creative industries - the lines between amateur and professional have become so blurred that we are all (with a few lucky exceptions) treated like aspiring amateurs, no matter how experienced, no matter how seasoned. Sadly, the more our profession is treated as an industry, the less we creatives, without whom nothing would happen, are treated as professionals within that industry, the less we are accorded a modicum of courtesy and respect.
Why should this be?
One colleague blames the fashion for 'inclusion'. Essentially a good idea, this should mean that nobody is ever excluded from participation in the arts. But this same idea has now become so tied up with issues of self esteem and therapeutic ideals that nobody is ever allowed to say that a piece of work is not very competent. Nor - in the welter of suggestions that creativity promotes wellbeing - are we allowed to say that quite often the creative process sucks. You get stressed, tired, sad, overwrought.  As usual in life, you have to work damn hard to achieve anything worthwhile.
But sadly, we are tied into a creative culture in which we must always encourage, always praise. We can't tell it like it is. Nobody must be put off, discouraged, demoralised. I'm not in the business of discouraging or demoralising either. But nobody would suggest that a pianist or violinist could become a great musician without plenty of hard work and practice, so why does everyone in the world seem to think that if they had the time, they could simply sit down and write a novel?
Of course, I know the answer to that one. It's because most people can actually read and write, so they think that's all there is to it. It's a bit like somebody who can play Chopsticks fondly imagining that they can then move seamlessly onto Chopin ! And sadly, too many in our 'industry' tend to subscribe to this belief, treating all of us, from amateur to seasoned professional, with the same oddly impersonal lack of courtesy.
As Scottish singer/songwriter Dougie Maclean puts it in his wonderful 'Scythe Song' -which compares learning to play a musical instrument with learning to use a scythe, skilfully, professionally, intuitively - 'it is not a thing to learn inside a day.'
Neither, dear reader, is writing fiction 'a thing to learn inside a day.'

An apprenticeship measured not in days, nor in years, but in decades.

And – even should a measure of mastery be achieved – an apprenticeship that has to be continually rearticled in order to articulate the new.
May 05, 2011 8:53 pm

Leela Soma said…
Well thought out and so true Catherine. This needs a much wider audience. Who would dare publish it?
May 06, 2011 3:29 pm

Catherine Czerkawska said…
Think that's part of the problem Leela. Nobody will stick his or her head above the parapet! Been having similar discussions with people working in theatre. The position of, for example, actors, is lamentable at present.
May 06, 2011 5:01 pm

Weekend Yachtsman said…
So basically it's another instance of "all must have prizes", I suppose?

How well-meaning and how corrosive of real achievement!

I take issue with this, though: "we creatives, without whom nothing would happen..." Unfortunately, as you've said yourself, things DO happen with completely uncreative people (think ghost-written "celebrity" rubbish), because it's the marketing and the image that sells these days, not the quality of the product.
May 07, 2011 9:34 pm

Catherine Czerkawska said…
When I say 'we creatives without whom nothing' I suppose I mean that even the ghost written stuff has to be written by real writers, (often very talented writers, who struggle to find markets for their own excellent work) who have to conceal their identities, so that the celebrities can put their name to things they haven't even created, pieces of work that have to sound as if they themselves have written them. (And honestly, I think some of the celebrities start to believe in their own fictions, i.e. the fiction that they have actually written the stuff!) There's a skill to it, and it can be lucrative, but it's a mad world. There's a story about one celebrity 'author' - apocryphal or not, I don't know - who sent a gift of a signed copy of 'her' book to her ghost writer!
May 08, 2011 1:29 pm