November 15, 2012
A couple of weeks ago, I was asked to do a talk loosely themed on 'how I got to where I am now'. Quite apart from the fact that I'm not quite sure where I am now, the actual exercise of looking back over all these years of writing, producing and publishing was a salutary experience. The wonder of it is that I'm still here, still writing. Clearly, it's an obsession. I can hardly remember a time when I wasn't writing, and I definitely can't remember a time when I wasn't happier making up stories than living in the real world.

I was severely asthmatic as a child. Books, radio and the power of my own imagination were my salvation back then. I've looked at my old school reports and it's clear that I spent far less time at my primary school than I ever did at home. Those were the days when you were kept at home with asthma. The available medication was ineffective and had unpleasant side effects. We lived next door to my grandparents and my mother helped out in their tiny sweet and tobacconist's shop in smoky Holbeck, not far from the centre of Leeds, so there was always somebody to look after me: my mum, my aunt, my nana or my beloved grandad.
As well as the asthma, I had a string of other illnesses, one after another it seemed: whooping cough, mumps, serious measles, influenza. (I'd like to give them all to the milkman's horse, instead of you, my grandad used to say, only half in jest.) The world of make believe was so vivid, so enticing, that it became a place of retreat for me from the miseries of sickness. Actually, if I'm honest, I hardly remember being ill at all, although I have vague memories of the sense of 'unease' which was always the preliminary to some nasty affliction or other. I do remember struggling to breathe, the hideous, concentrated panic of it. And being delirious, and seeing, quite literally seeing, dark horsemen galloping across the foot of my bed. But I also remember the pleasure of being at home, of beginning to feel better, of being free to listen to the radio and read my books and play complicated and inventive games with my toys. I remember the time my Polish father spent with me, lots of time, even though he was working by day and studying by night. But he always seemed to have time to tell me stories, and draw with me and read to me and make things for me. 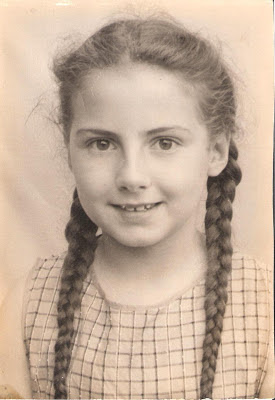 Then, when I was twelve, we moved to Scotland where dad had secured a new job in a scientific research institute, and everything changed - except my need for make believe. Nothing in my life till then had prepared me for the cruelty inflicted on an awkward, ugly duckling of an English thirteen year old by her Scottish schoolmates. One with glasses and a Yorkshire accent at that. I didn't help myself much, it's true. I was naive, shy and desperately homesick for Leeds. I suffered two years of misery, leavened only by the bright beacons of vacation in a sea of educational despond. None of it was physical. They just froze me out.They mocked my accent, they mocked the way I looked, they sniggered and passed clever, insulting remarks just loud enough for me to hear them, while I stood like a rabbit, caught in the headlights of their self satisfaction, and all the time, as bullied children will, I blamed myself and told nobody. Afterwards, as an adult, I thought what hell it must be to be a bullied child in a boarding school. At least I got to go home at nights. Sanctuary. Not that I told anyone at home what was happening at school. I used to pray for the illness I had suffered when I was younger, but on the whole, I could breathe more easily in Scotland.

I did very well academically. The classroom was another, lesser refuge. I can remember wishing that we had no break times at all. I spent even more time living inside my head, and I began to write poetry. Things improved during my third year in Scotland and when we all changed schools for our final two years and travelled out of town by train each day. I was beginning to find my place, lose weight, make a few friends, although I was always aware that I didn't quite fit in and possibly never would.

I was still writing. And starting to be known and acknowledged within the school community as the girl who wrote stuff. Then, in spite of a longish spell in hospital with another severe bout of asthma when I was sixteen,  (during which I had a couple of only-half-joking proposals of marriage from two kindly young male nurses from Mauritius!) I managed to get a place at university and set off for Edinburgh where, once again, everything changed. For the better this time.

mavis said…
My heart goes out to kids who are bullied - so glad you had your writing to turn to - and that it has definitely paid off.
Waiting to hear more.
November 16, 2012 12:34 pm

Mari Biella said…
I can certainly identify with your experiences, Catherine, as I was bullied at school too - and, though I would never have said this at the time, I've often wondered since if there wasn't an upside to the experience. I became desperately shy and turned inwards - but 'inwards' turned out to be such an interesting place that I've more or less stayed there ever since.

Isolation and alienation can sometimes be useful forces, if they're channelled - and it seems that you channelled them into your writing. I'm very glad about that - I'm reading 'The Amber Heart' at the moment and loving it!
November 21, 2012 12:44 pm