November 12, 2012
We first moved to Scotland when I was twelve years old and - although I've travelled about a bit - I've considered it my home ever since. Much of what I write is set in Scotland. But recently, I've begun to want to go back to my Yorkshire roots. Memories of Leeds are tugging at me, especially the place where I spent the first seven years of my life, industrial Holbeck, demanding to be explored and examined. Next year, therefore, I plan to write Yorkshire Girl,  a very personal memoir of what it was like growing up in Leeds back then. It's something I've tinkered with and thought about for a long time, but now it's positively demanding to be written! Meanwhile, for National Short Story Week, I'm posting a short piece of 'made up truth'. Poor Eliza Marshall gave her testimony to the Factory Commission in 1832 and you'll find her true story here on the wonderful Leodis website. Eliza's story is heartrending. I took some of her words and shaped them into a monologue with a Yorkshire accent. I remember Marshall's Mill from when I was a little girl. Even then, it seemed to be a strange place, one set apart from the clearly industrial buildings round about. 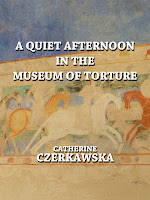 If you would like to read more short stories, I have a couple of small collections available on Kindle
A Quiet Afternoon in the Museum of Torture
and
Stained Glass.

Kathleen Jones said…
It's a very sad story Catherine - but true. You've 'got' Eliza's voice perfectly. The way children were treated seems unbelievable now. Part of my father's Irish family worked in the cotton mills and came to northern England to work in the mills there. My great grandfather started work at 12, but he eventually became a pattern maker - one of the lucky ones!
November 13, 2012 1:07 pm

Kathleen Jones said…
I've posted a link to your story from my Tuesday Poem blog, because it connects with this week's poetry!
November 13, 2012 1:36 pm

Catherine Czerkawska said…
Thanks, Kathleen. We must share a similar heritage. My grandmother's family were Leeds Irish - my great grandfather was a pavier. My gradad's family came down from Swaledale for much the same economic reasons. They had been lead miners and farriers. I started out in Holbeck and went to school in Armley - my dad started out as a textile presser when he first came to England after the war. The history of these children and how they were treated is always moving, isn't it?
November 13, 2012 2:00 pm