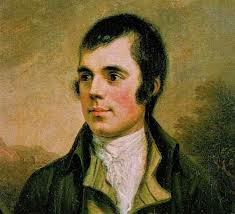 Ever since we moved to Ayrshire, when I was twelve, I have been a fan of our local poet, Robert Burns. When I was in my teens, we lived within easy walking distance of Burns' Cottage at Alloway, and I used to take myself off there on a Saturday morning. It was a nice atmospheric place then - hardly interpreted at all - and you could easily imagine yourself back in time. Or I could, anyway. I would lurk there for hours, conjuring ghosts which - sad to say - never appeared. But later, when I found that I wanted to write about Burns and his wife and his milieu, perhaps all that early daydreaming helped me.

The image above is - of course - the romantic portrait painted by Alexander Nasmyth. But this week, STV and David Heyman unveiled a more believable reconstruction of what the poet may have looked like. You can watch it  here - well worth a look. Scientists in Dundee had taken the existing cast of the poet's skull and - using up to date and fascinating methods - built up a more believable image. Well, I think it's more believable anyway. The picture has met with a mixed response. In fact the response has been rather like the response to a portrait, with people claiming to like it, not like it, or generally disputing whether it is in fact 'like him.' But nobody has seen him. Not in the flesh. Not even me, loitering in Burns Cottage, hoping for ghosts, all those years ago. Idealized 'poetic' portraits, like the one above - nice as it is - can't have told the whole story. 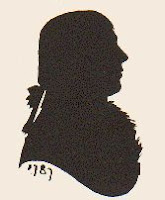 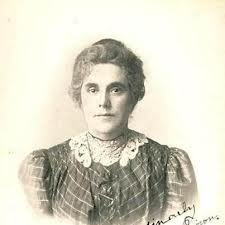 There's a silhouette which seems to have a rather heavier jaw than the neat little chin in the Naismith portrait. There's an old photo postcard of Jean Armour Burns Brown, the great grand-daughter of the poet, (above) who was said to resemble him. I have a copy of this in my own collection, and the eyes are very striking indeed. Contemporary descriptions often refer to his eyes as a noteworthy feature but these descriptions also stress that he was a countryman, the very image of a country farmer, albeit one who was singularly attractive to women. But we all know - don't we? - men who are deeply attractive but far from conventionally handsome. Often it's a question of energy, the ability to make you laugh, the ability to focus on you to the exclusion of all else, a talent for flirtation in a non threatening way.

And then comes the most recent image. At the point where it was unveiled, you can tell that - for some of those seeing it for the first time - the image was unexpected. It is one of those delightful 'sharp intake of breath' moments. And  even these reconstructions using sophisticated technology, are not the last word. But we've no reason to think that this might not be the closest we can come to seeing the real, true face of the poet. I'd love to know if Heyman interviewed the wonderful Ayrshire farmer and Burns devotee before or after the unveiling of the image, because the resemblance was pretty striking. Watch the programme and judge for yourself. 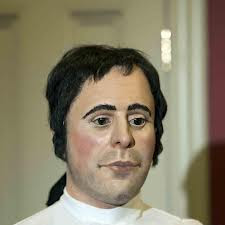 Looking at this image, people have remarked that the eyes are too close set (I don't know how much the structure of the skull would dictate this - but one assumes it would!) that the chin is too heavy (but then there's the silhouette to consider) and that it looks like a waxwork. To me, it also looks pretty much exactly like one of any number of the Ayrshire farmers who are my neighbours, here in this village some ten miles down the road from Alloway. There is an Ayrshire 'type' if it's permissible to say this: strong, stocky, very, very dark, thoughtful, energetic, intelligent, handsome rather than fine featured. You can spot them everywhere in Carrick. Although we know that Burns's father came from Kincardineshire, his mother, Agnes Broun, was a local woman. I've often wondered if Agnes conformed to that type as well - because if Rab loved his Jean (and I'm pretty sure he did!) she too was very dark, handsome rather than pretty, a fairly typical Ayrshire lass.

I've maintained a constant low key obsession with Burns and the women in his life for years. You can tell, can't you? Some time ago, I wrote a radio play about the writing of Tam O' Shanter - it was produced with the brilliant Liam Brennan as Burns and the equally wonderful Gerda Stevenson as Jean. For once, we got the right accent for Rab - Liam comes from Kilmarnock. You might be able to download it free, here although this seems to be a pirated version. But nobody else is doing anything with it, so if you want to listen, you might as well give it a try. Later this year, I will probably publish the script as an eBook to Kindle. I have about 100 plus hours of radio drama sitting about in script form, and some of the original plays, like this one, are worth publishing.

Meanwhile, I also wrote a short stage play called Burns on the Solway, for Glasgow's Oran Mor, A Play, A Pie and a Pint. It was directed by Michael Emans with Donald Pirie as an astonishingly believable - and ultimately heartbreaking - Burns, Clare Waugh as an equally heartbreaking and beautifully played Jean and Celine Donoghue providing music to die for: one of the most rewarding productions I have ever worked on. I loved what they did with it. You can download and read it on Kindle here in the UK and here in the USA. But meanwhile, you might like to read a review of it on today's Indie eBook Review, by my fellow playwright, Cally Phillips. 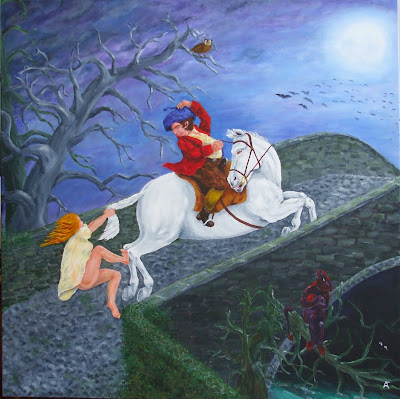 Robert Burns has become something of a constant in this family. My artist husband Alan Lees made a life size carving of Tam O' Shanter and his grey mare Meg. And then, when arthritis put paid to the carving, he painted a whole series of images of Tam, including this one above. (I particularly like the eyes under the bridge.) My new historical novel, The Physic Garden, due for publication in February, isn't about Burns, but it is set in Glasgow only a few years after his death, and the poet certainly gets a mention  I'm gearing up to tackling a much longer piece of fiction about the poet. But perhaps not this year!

Meanwhile, if you want to know a bit more about me, you could do worse than have a look at the interview I did recently for Tara Moore's lovely blog. It was a great pleasure to answer such an interesting set of questions.