January 15, 2013
Last night, I went to a neighbouring village to give a talk to a group of ladies from the church 'Guild'. They were all what you might call older ladies, the kind of people easily dismissed by the young and cool. The meeting - in a warm, light church hall - began with a hymn and a prayer and ended with a hymn and a prayer. I've done this talk often before. I take my collection of examples of Ayrshire embroidery - along with a few other bits and pieces of interesting old needlework - some of it dating from 1840, one or two other pieces from 1800 or even earlier, and talk about the history of this magical embroidery, where it came from, how it was made, who did it and why. Even mixed groups of men and women seem to enjoy handling this work. It is, it has to be said, so beautiful, so microscopically fine, that you do find yourself wondering, as this audience so clearly did, just how women working by candlelight or oil lamps in dark little cottages, in the early 1800s, could possibly have created something so amazing. They would gather in a single cottage to share expensive candles, or work outside, sitting on turf or straw covered stones, to take advantage of natural light. Their health suffered, eyes and lungs in particular. The work - as so much 'women's work' - was undervalued. And remains rather undervalued even to this day, locally, although collectors in America will pay high prices for fine examples. Embroidery is on my mind at the moment, because one of the characters in my new novel, The Physic Garden, is a talented needlewoman, and her needlework figures largely in the story.

The ladies of the Guild were, as they always are on these occasions, interested, kind, positive, cheerful and hospitable. They could give lessons in how to treat a visitor to some other groups I've spoken to. The 'Rural' are the same. I always come home feeling inexplicably happy, although slightly worried at the average age of these groups, wondering who will come along to take their places. Mind you, the Rural, in farming areas like this one, seems to have no shortage of new, younger members.

At the end of the evening, when we were chatting over the tea and biscuits, one of the ladies reminded me about a trilogy of radio plays I wrote some years ago. It was called The Peggers and The Creelers and it was set here in the West of Scotland, a series of plays about the fishing families of the coast, the inland boot and shoe makers, and the traditional tensions between these two groups of people. I had done some of the research for my Masters degree and then written a series of plays about it. There was a certain amount of mistrust between the two communities and it fascinated me. When the plays were broadcast, people would stop me in our nearby town, to talk about them. One farmer told me how he had been listening in the cab of his tractor, and realised that he was in the very field where the characters were standing.

Last night, the lady told me she still had the plays on tape and listened to them from time to time, because she had enjoyed them so much. Last year, when I was sorting through all my old manuscripts, I found a big box of flimsy typescript. It was The Peggers and The Creelers, written as a trilogy of novels. I had forgotten all about them. Back then, I still did daft things like that. Thousands and thousands of words, just for love. And I remembered that my agent at the time - we're talking many years ago - hadn't even read them because, so she remarked, 'nobody wants historical fiction at the moment.' Last night I found myself talking about all this with enthusiasm. 'I'd love to read them,' my questioner told me. Oddly enough, she isn't the only person to have reminded me about those plays, those stories, over the past few months. And although back then, I could see that this might have been a niche project and something no traditional publisher would want, I can also see now that with the advent of Kindle, and Print On Demand, things might be different. Because the diaspora of people with Ayrshire roots is a large one.

So, when The Physic Garden is finished, and a few other projects are under way, I may well dig out that box of flimsy typescript and - in the second half of this year - see what I can do with the Peggers and the Creelers as a series of eBooks, for Amazon's Kindle, in the first instance. As I packed up my lovely whitework, last night, and got ready to leave, the lady who liked my radio plays said 'I hope you do publish them as novels. I'll look forward to it.'

Thinking, in that company, that I might well be among people who favoured paper books over eBooks (the smell, the feel, the permanence) I said 'Well, they'll be on Kindle first and maybe as paperbacks after that. )
'Oh no, dear,' she said.'I have a Kindle now. Wouldn't be without it.' 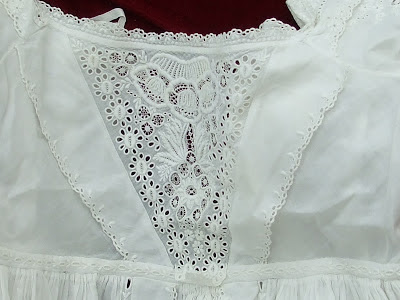 Dee said…
I, too, have a Kindle and absolutely love it. I resisted for a long long time because I love books but finally gave in - we have so many books we have run out of places for them. Kindle is the best.
January 15, 2013 1:24 pm

CallyPhillips said…
Old chinese proverb say 'Readers can be found in the most unusualplaces'!! We should remember the democratisation of ereaders. While some people will always turn their noses us at ebooks, some just want TO READ and will do it how and when and where-ever if they can get a good story. And YOU, your job is to get those good stories out of the filing cabinet, dusted down and published!
January 15, 2013 1:29 pm

Rosemary Gemmell said…
What a lovely post, Catherine, and so inspiring to find such an interested group of people. Great project you have on your hands for later in the year!
January 16, 2013 2:47 pm