Inspirations for The Curiosity Cabinet: The Isle of Gigha

February 27, 2013
My fictional island of Garve, in The Curiosity Cabinet and also the unnamed island in my later novel, Bird of Passage were certainly inspired by the little isle of Gigha, which lies just to the west of the Kintyre Peninsula and is the most southerly of the true Hebridean  Islands. It's pronounced Gi-ah, with a hard 'g', in case you were wondering!
My husband, Alan, first introduced me to this island which was to become such a significant and inspirational place for me. Years before we met, he had been fishing for clams off Gigha with his brother-in-law when the boat's engine had broken down. Some of the island fishermen had come out to rescue them, given them generous hospitality and one Willie McSporran had managed to repair the engine with spare parts retrieved - precariously - from the little island 'tip' at the north of the island. After that, and over many years, Alan would return to Gigha whenever he could. He exchanged fishing for work as a charter skipper on a series of yachts and whenever they rounded the somewhat perilous Mull of Kintyre, Gigha was the place where they stopped off.
I still hadn't visited the island myself, although I had heard a lot about it over the years.
Then, when our son was three or four, we had a summer holiday there, staying in the B & B at the island post office and shop, which was then run by Margaret and Seamus McSporran, the famous 'man of fourteen jobs' - and also Willie's brother.
It was bliss. A perfect place for a holiday with a small child. Safe, friendly, beautiful. We walked, we picnicked, we paddled, we fished. My memories of that time involve digging furiously for lugworms on the beach. Or sitting on the rocks in the sun - the climate is very mild here and quite often the rain leaps right over the island to fall on the mainland beyond.


Since that first visit we have been back countless times, with friends, with our son, or just on our own to visit Willie and his wife. Every time we go, we seem to find something new to see and explore, which is strange, because this is a small island - only seven miles by one and a half wide. But it has some twenty five miles of coastline, so there is a lot to see. And because it was strategically very important, placed between the territory of the Lords of the Isles and the mainland, it has a complex and fascinating history.
At some point, it was also the subject of a brave community buyout. You can read all about it on the island's own website here. I've written my own big factual book about the history of Gigha - called God's Islanders, it was published by Birlinn in 2006. It was a labour of love and if you want to know all about the 'real' Gigha, then you could do worse than read it.  Largely thanks to lovely Willie McSporran who sat with me over vast quantities of tea and pineapple cake, and patiently told me all about the island history for many, many hours, it is as authentic as I could make it.
But Gigha was in my head. Which is why I found myself setting two of my novels on a small Scottish island that bore a strong resemblance to this one. In The Curiosity Cabinet, Garve is very like Gigha.
'The island reminds her of those magic painting books. The shop here used to sell them. You would dip your brush in water and pale, clear colours would emerge from the page, as this green and blue landscape is emerging from the mist.' 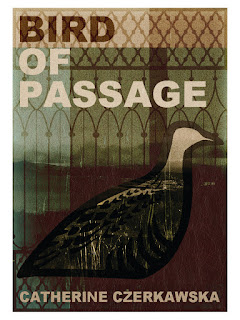 In Bird of Passage, a more harrowing tale altogether, a Scottish set homage to Wuthering Heights, Finn comes to an unnamed island which - again - bears some resemblance to Gigha. It proves to be his salvation and his tragedy.

All the characters in both novels are, of course, entirely fictional in every way but one.
In The Curiosity Cabinet, Alys revisits the island after an absence of twenty five years and is captivated by the embroidered casket on display in her hotel. She discovers that it belongs to Donal, her childhood playmate, and soon they resume their old friendship. Interwoven with the story of their growing love, is the darker tale of Henrietta Dalrymple, kidnapped by the formidable Manus McNeill and held on the island against her will. With three hundred years separating them, the women are linked by the cabinet and its contents, by the tug of motherhood and by the magic of the island itself. But the island has its secrets, past and present, and the people of these islands can - so an old historian observes in the prologue to the novel - keep a secret for a thousand years.
That, I'm sure, is the absolute truth!