I have been mad about vintage and antique textiles for as long as I can remember. When I was a child, my mother - who avidly collected china and porcelain - used to haunt jumble sales. After we moved to Scotland, she would go to auction houses and she would often take me with her. Later on, when I became old enough, I would even go along and bid for her from time to time. I found it all very exciting. But the things that excited me most of all were the old textiles of all kinds - wall hangings and embroideries heaped into odd corners of the saleroom, the ancient shawl folded on the table at a boot sale or antique market, the heaps of linen, crammed into cardboard boxes and sold in bulk, just as they had been removed from drawers and chests. 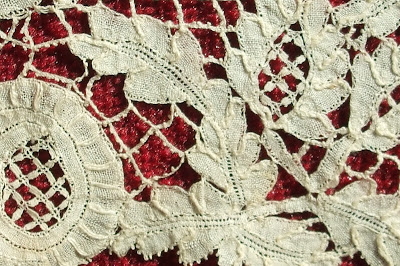 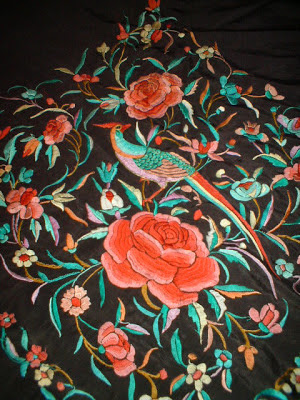 It wasn't too long before I found myself buying some of these things for myself when I could afford them - and I often could afford them, because back then, nobody much wanted them. It's different now, of course, but there are still occasional bargains to be had. Then, I found myself writing about the textiles in my fiction. There was something about them that seemed to lend itself to stories, the sense perhaps that somebody, some woman somewhere, had stitched emotions, hopes, fears, into a hanging or a garment, a handkerchief or - in the case of the Curiosity Cabinet - a heavily embroidered box, a casket in which a woman had kept her most precious possessions. The Curiosity Cabinet isn't really a cabinet at all. (And yes - I know that a real curiosity cabinet used to be a case in which some collector, usually a man, kept specimens of all kinds.) But at some point, I think, I saw an embroidered 'raised work' casket in a museum with its contents displayed alongside, and it struck me that the contents were all 'women's things' - uniquely and powerfully female. And as all writers do, I started to tell myself the story behind them. A story of my own invention.
Later on, I acquired my own fairly extensive collection of old textiles and for some years spent part of my week dealing in them. It was  - and continues to be, albeit less intensively - what allowed me to buy time to write, even when cash flow was a problem. No surprise then, that in my new historical novel, The Physic Garden, embroidery also plays its part - a key part in the story. I'm no seamstress myself. My late mother was a fine embroiderer, but I'm afraid I've never had the patience. Instead, I try to stitch words into something worth having - just as the lady who originally made the embroidered casket in The Curiosity Cabinet tried to stitch something of her own story into a small work of art, making it for herself and her own satisfaction, but also - I think - with some thoughts of other people enjoying it in the future. 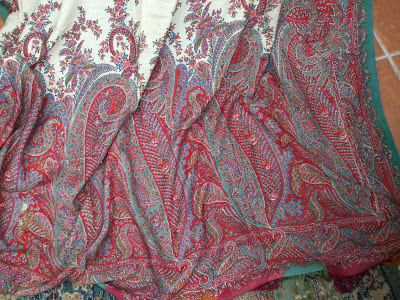