There Was A Lad - Happy Birthday to Rab. 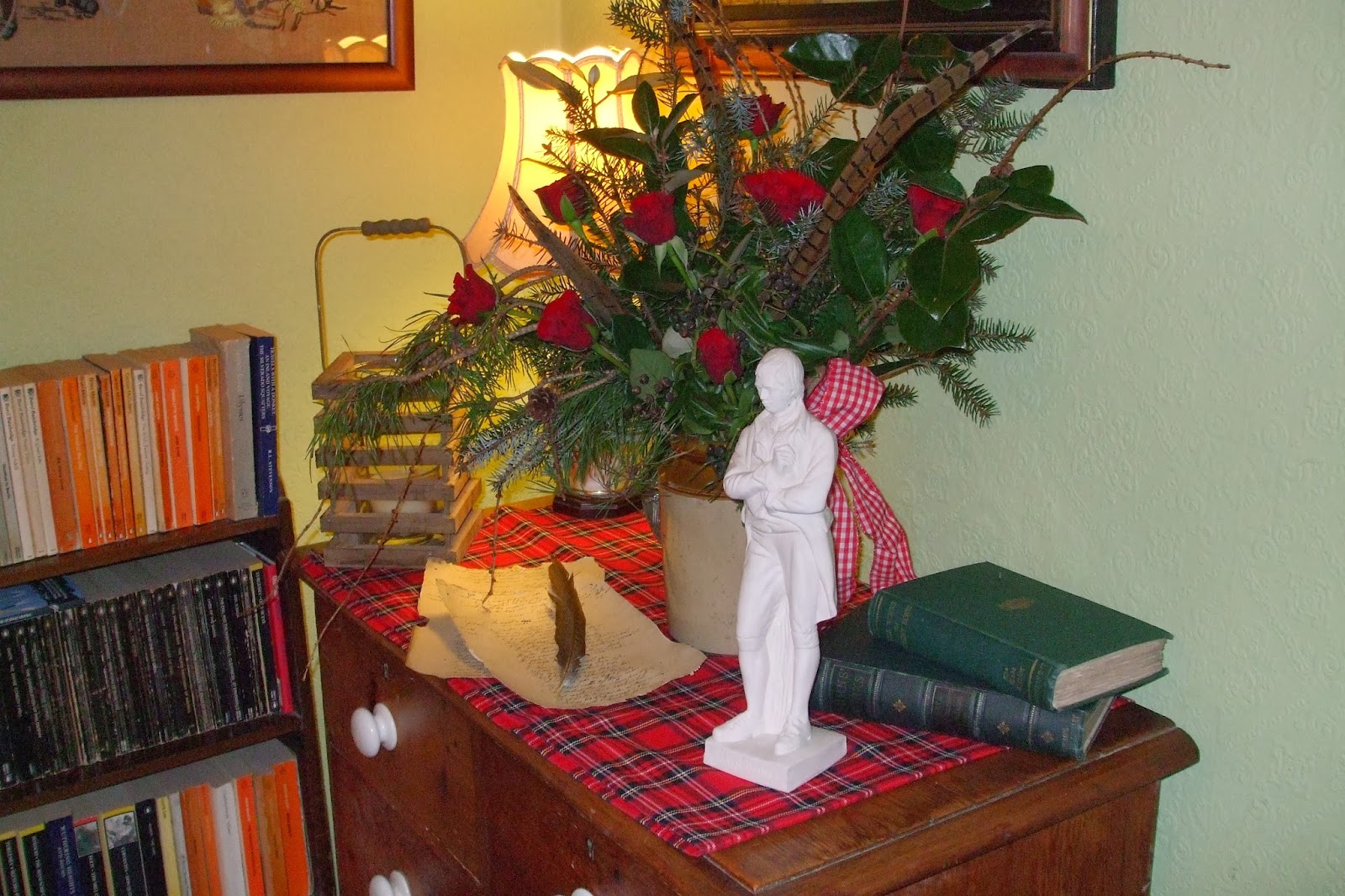 This post is reposted from my last Authors Electric post. I thought it might be worth another outing on my Wordarts blog. After all, you can't have too much of a good thing, and Rab was a very very good thing!

Or as Rab himself would have it:


There was a lad was born in Kyle,
But whatna day o' whatna style,
I doubt it's hardly worth the while
To be sae nice wi' Robin.

Our monarch's hindmost year but ane
Was five-and-twenty days begun,
'Twas then a blast o' Janwar' win'
Blew hansel in on Robin.

So this post is a wee pre Happy Birthday shout out to possibly my favourite poet of all time: Robert Burns.

We'll be having a smallish, private Burns Supper in this village about a week later. We'll eat traditional food: cock-a-leekie soup, haggis, steak pie, mashed potatoes, mashed turnips, trifle, oatcakes and cheese. This is not, I have to confess, my favourite meal of the year. I can pretty much take or leave everything except the trifle, the oatcakes and cheese. But the company is always good. There will be plenty of wine, some whisky, excellent conversation, poetry, a few short and entertaining speeches, lots of toasts and some songs.

I have, occasionally, been invited to speak at other, more formal Burns Suppers - on one memorable occasion I had to give the 'Immortal Memory' which is the big speech of the evening. I had a tooth abscess and was on those antibiotics where they warn you not to touch a single drop of alcohol because it will have disastrous effects. (This is true, by the way. The effects are, I'm told, instantly emetic!) So I had to do it completely sober and toast Rab in mineral water.  The poet would have sympathised, both with the toothache and the abstinence.


I've loved his poetry, but most particularly his songs, ever since we first moved to Ayrshire when I was twelve. I used to walk to Burns' Cottage in Alloway - still very atmospheric back then - and spend an hour or two daydreaming. The poems so precisely and heart-rendingly reflect the countryside around here. The poet himself seemed such a mass of contradictions - and the more I researched his life and work, the more intriguing those contradictions became.


I wrote a full length radio play for BBC R4 all about the writing of Tam O' Shanter, and then a stage play for Glasgow's Oran Mor, called Burns on the Solway.  As the playwright, I found the whole production more illuminating than I had believed possible - when a production goes well, and this one did, it somehow intensifies and enhances the idea you first had. And now, I seem to be writing a novel, about which I can't say any more than that it has been simmering inside me for a very long time. Perhaps since I was twelve and daydreaming in the old cottage. But even while I was writing The Physic Garden, William Lang, in that book, insisted on talking to me about Burns - who would have been a much more recent memory for my narrator. (Burns died in July 1796)

First, William says 'I often think Mr Burns and myself might have had a great deal in common if we had had the good fortune to meet and talk about our respective experiences. Burns wrote convincingly and lovingly about the flowers of his native heath. I cannot even now read the lines, oft hae I rov'd by bonny Doon, to see the rose and woodbine twine; and ilka bird sang o' its luve, and fondly sae did I o' mine, without it bringing a lump to my throat, which is a very daft notion after all this time.'


And later, he quotes again: 'The tocher’s the jewel, as the poet Burns wrote. And so many men are but knotless threids who will slide away from lassies at time of need.'

Poets, male and female, don't always practise what they preach, and Burns was very far from being the saint depicted in so many fulsome Burns' Supper speeches. He was, in fact, capable of appalling behaviour, even by the different standards of his day. But any eighteenth century man who can write a song like The Tocher's the Jewel, has got to be applauded. Here's the original - followed by a loose translation for anyone who needs it.

Your offer of love is an arles penny (this was money paid to seal a deal, usually between servant and master!)
My dowry's the bargain you would buy
But if you're crafty, I'll be cunning,
So you with another your fortune may try.
You're like to the timber of yon rotten wood,
You're like to the bark of yon rotten tree,
You'll slip from me like a knotless thread
And you'll  spend all your credit with more than me.

Not the best translation in the world, mostly because some of these words and phrases are virtually untranslatable - and still current, here in Ayrshire. Only a little while ago, I heard somebody describing a man sadly but accurately as a knotless threid. But it's this poem, among many other wonderful poems and songs, with its powerful and angry evocation of the voice of the young woman, that pays for all. For me, anyway.

I'll finish with another image from the play, courtesy of Leslie Black who took a series of stunning production photos. 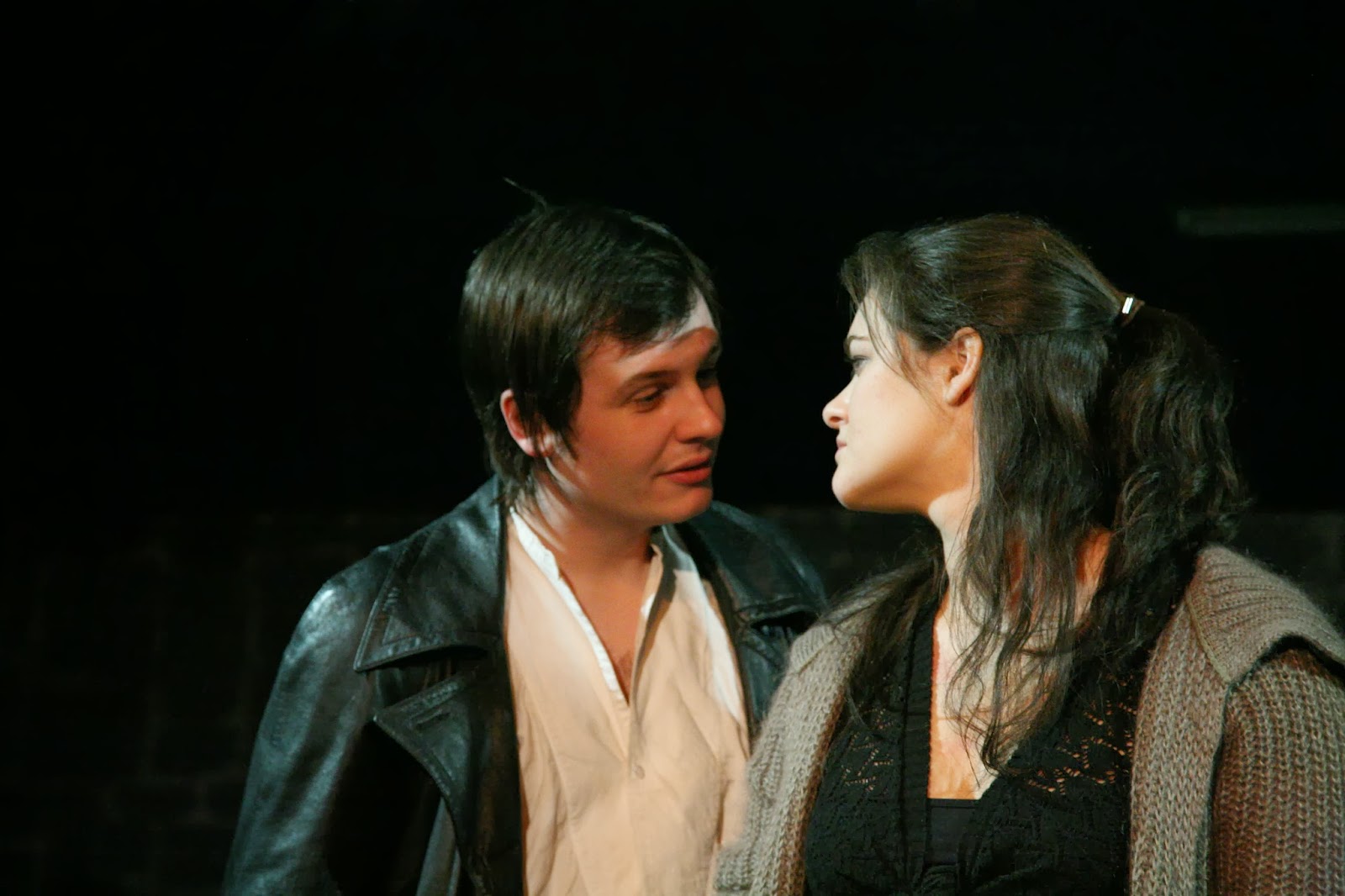