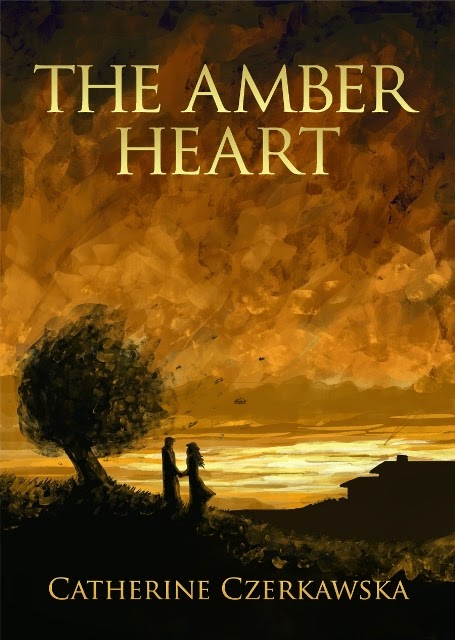 I’ve written a number of plays set in the past and dramatised even more novels for radio, most of them classics such as Kidnapped and Catriona, Ben Hur, The Hunchback of Notre Dame and the Bride of Lammermoor. But The Amber Heart, the very first draft of which was written back in the 1990s, was my first attempt at a longer piece of historical fiction. I had been spending a lot of my free time researching my Polish family history and was becoming increasingly intrigued by it.

Although I was born in Leeds and brought up in a working class family, my dad’s family had been the landed nobility, the szlachta. The Czerkawskis came complete with a couple of historic houses (lost in the war) and a coat of arms. From the handful of battered photographs my dad managed to bring out and the tiny silver hand mirror that had once belonged to his mother, obviously part of one of those beautiful dressing sets you sometimes see in country houses, it seemed like a world in a fairytale, something remote, long lost, as indeed it was.

Meeting my great uncle Karol Kossak, an artist from a distinguished family of Polish artists, only served to reinforce the feeling. He was like a character from a Viennese operetta and just as charming. I started my research project back in the eighties, well before the internet could facilitate such enquiries. I think I always had it at the back of my mind that I wanted to write a novel, perhaps more than one, based on my Polish family history.

I was suprised by how much I managed to discover. First of all, I got my dad to write down all that he could remember and I still have notebooks stuffed with memories and little sketches to illustrate them. Since dad died back in 1995, I’m very glad I have it now. The place where dad was born, in 1926, is now in the Ukraine although back then it was part of the Polish ‘wild east’. I sent a polite enquiry to the historical museum in the city of Lviv. This had been Lwow, or Lemberg under the Austro Hungarian Empire. This was the beautiful city where my grandmother was born and to which she and my father retreated when war threatened everything they knew and loved. A very kind researcher from the museum took it upon himself to head out to the village of Didyliv (the place my dad knew as Dziedzilow) and take some photographs, saying that people still remembered my grandfather and the family that had once lived in the ‘big house’. Actually the house itself wasn’t very big by that time. The old mansion had been burnt down in some uprising and the family lived in what had been the old steward’s house. The estate had once belonged to my grandfather’s great uncle Julian who had been a late nineteenth century politician, a Polish representative in the Austro Hungarian parliament. I have copies of newspaper articles about him. He was unmarried and my grandfather Wladyslaw – very much a favourite - inherited the estate from him.

It turned out that Wladyslaw’s own father had died while still quite young and his widow, Anna, had married the Ukrainian estate manager. This had been something of a scandal at the time. It was only when I investigated dates that I realised that Wladyslaw had been only eight years old when he fell heir to Dziedzilow. This meant that his youngish widowed mother Anna, living on another family estate at Pszemyslany, had to secure the services of a manager and would probably have travelled between the two places to keep an eye on her son’s inheritance. It was hardly surprising that a relationship began, although my father, who could remember his father Wladyslaw talking about it, was aware that it wasn’t a particularly happy marriage. There was a child, a much younger half sister for Wladyslaw, and she was brought up alongside my dad, although she died in the war. Relative dates and ages are very important when researching historical topics. We often forget how much the youthfulness of the protagonists impinges on the story– especially in historical writing when people often died young and tended to leap right in and do things early.

The whole Austro Hungarian milieu fascinated me. I found a Czerkawski forebear who had many wives and many children, lived a long life and died in a riding accident when he was in his eighties. There were the artists who had travelled to Lwow and Vienna and sometimes to Paris. These borderlands were extraordinarily dangerous and skirmishes were commonplace. Of my grandfather’s family, two older brothers were killed in small uprisings, my grandad died and is buried in Bukhara on the Silk Road, having fallen victim to Stalin and a forced march east, rather than the Nazis, and his younger sister Ludmilla died in a concentration camp. Her ‘crime’ seems to have been that her husband was an army officer. An aunt was shot. A half sister was hanged by the Nazis. Only my grandmother, my great aunt Wanda, and my dad survived.
All of this factual background fed into the fairly hefty piece of work that eventually became The Amber Heart although that whole story is set in mid nineteenth century Poland. One of these days I may tackle a sequel. At the time, it was my third novel and my agent couldn’t sell it. The late lamented Pat Kavanagh was a good, even a great agent but the consolidation and corporatisation of the old publishing houses was well under way. We were being sold the idea that it would be good for writers. It wasn’t. For mid-listers like myself, it was disastrous. Pat told me repeatedly that she loved the book, and she did her very best for it. Somebody even called it a 'Polish Gone With The Wind'. But ultimately, nobody would touch it with the proverbial bargepole. The reason they all gave was that no matter how big, how ‘epic’, how sexy the story (and believe me, this is a very sexy story) Big Publishing simply would not touch anything that was set in Poland. Kiss of death, they all said. Nobody wants to read anything set in Eastern Europe.

I tried it again over the years, but became disillusioned, shelved it, but couldn’t leave it alone. I tinkered with it from time to time. Polished it, made it better. Then Amazon came along – thank Bezos - with Kindle Direct Publishing and gave me the wherewithall to get it out there myself. Sales go up and down, but on the whole, it sells very well. In some ways, I’m grateful for the delay. I knew a lot more, had done more research. It is, I think, a much better book than it might have been. It’s long, very long so I’ve published it as an eBook in two parts, The Sorrel Mare and Noon Ghosts. But the ‘box set’, The Amber Heart, is, I think, a better deal and that's the one I'd recommend. You can find it here in the UK, and here in the USA. This one, I'm also planning to publish to various other platforms before the end of the year.
Eastern Europe family history Historical Fiction historical research Poland Polish Gone with the Wind romantic fiction sagas