March 03, 2015
Some people reading this might not know that, wearing my other hat, I buy and sell antique textiles - partly because the contribution to our family income is essential when it comes to buying more writing time, and partly because I'm daft about them and have been since I was in my teens.

But just occasionally, I'm tempted by teddies as well. And last week, it happened again. I managed to acquire the sad little family of bears you see on the left. Mostly, I don't keep them - I rehome them and these will be no exception. I'd quite like to keep them and add them to my own collection but I can't afford to. Mind you, I did buy a couple of elderly Chad Valley teds a few years ago and they are still sitting in my living room just because one of them is so cuddly, even more cuddly than my own old bears, Mr Tubby and Teddy Robinson, that I can't 'bear' to let them go.

Anyway, this quartet of teds came together in the same auction lot and obviously belonged together and I'm not planning to split them up. Like rescue dogs that have been brought up together, I'll try to find some sympathetic arctophile to take all of them. The biggest ted is the most valuable. This isn't always the case, but he isn't just any old bear, he's a pretty rare antique bear. He has no labels and no, he isn't a Steiff, but with his triangular face, his long arms and longish humped body, his quite chubby legs with definite ankles, his stitched nose, his boot button eyes and low set ears and most of all because of his slightly pointed pads on his feet, I think he's probably a very very early Ideal bear all the way from the USA - pre WW1 - which is a long time to survive. He's a bit threadbare, he's a bit wobbly, and he has some trouble about the feet where you can see some of his wood wool stuffing - but he's so smiley and engaging that I'm sure somebody somewhere will love him as much as I do and - more importantly - as much as somebody so clearly did in his long, long past.

He was very dirty and I have a feeling he had been kept with his companions in an attic - or at least that's what he looked like. The only thing I've done is given him a very gentle, very cautious clean up to remove the worst of the grime and show him up in his true honey colours. With him there's a much smaller blue bear - not half so old, I'm sure, but jointed and with nice eyes. There's a chubby little Japanese bear - much faded pink wool - with a working squeak (like Piglet!) which surprised me when I was brushing him very gently with a soft brush and touched his tummy. And finally there is a very strange creature with upright arms, no eyes, a terribly threadbare knitted jumper and feet that look as though they were intended to be booted at one point. He has clearly been loved almost to bits and only rescued by a grubby canvas covering, crudely stitched. Where it is coming apart, you can just see that there might once have been mohair or similar beneath - but if you touched him too much, he would fall apart!

Looking at him, the shape and size of him, I think he was once a Merrythought Woppit Bear - issued in 1956 from the Story of Woppit cartoon strip. Almost unrecognisable, for sure, but I think that's what he was! His better known (and better preserved) cousin is, of course, Donald Campbell's Mr Whoppit. This one could do with some eyes, and possibly a whole knitted suit, to keep him together. But I find him touching beyond belief - somebody has clearly loved him very, very much.

That's the problem with dealing in something you love - it's always so difficult to let them go! Meanwhile, if you think you too might like to try your hand at buying and selling antique and vintage items to add to the household income, I've written an eBook about it. It's called Precious Vintage and it's available across all platforms, but I'll give you the Amazon Kindle link, here in the UK and here in the USA. 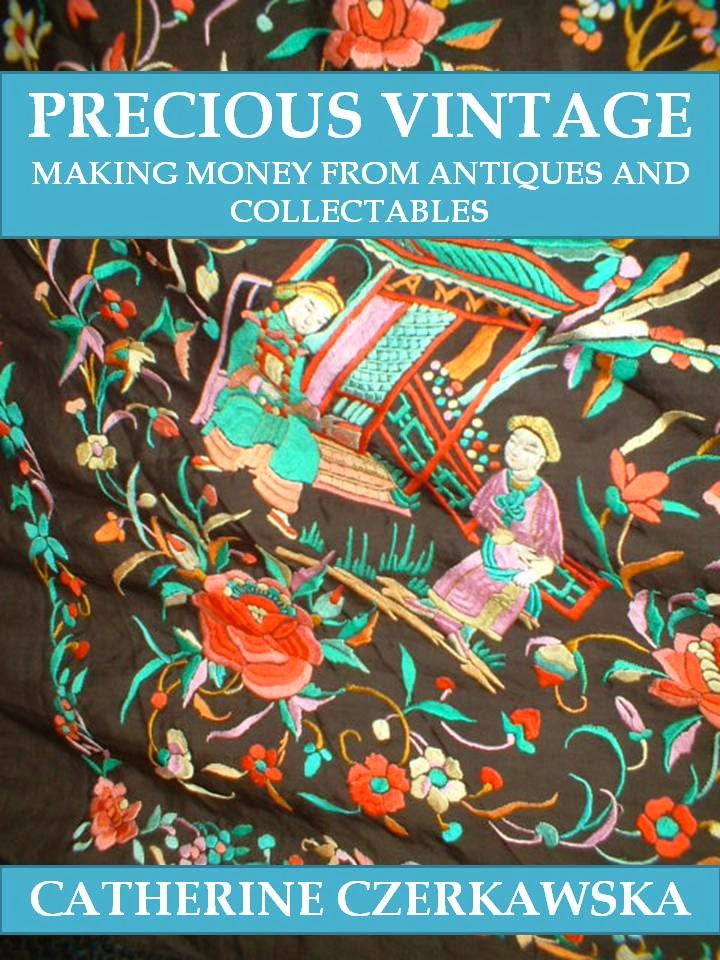