Is this the real Jean Armour?

March 16, 2015
It happened a few months ago and it came quite out of the blue. I had never seen this picture on the left before. Then it popped up online, on the BBC's 'Your Paintings' site, under the name of Scottish portrait painter, John Moir. I'm assuming this is because the BBC, in conjunction with museums and councils, are now digitising public collections - which is excellent news for historical novelists everywhere!

For the past year or so, as anyone who follows this and the Authors Electric Blog will know, I've been researching - and now I'm in the middle of writing - a novel about Robert Burns's wife, Jean Armour, his 'bonnie Jean'. But of course, the research never ends. You find yourself pursuing strange little byways of history, enticing and fascinating, speculating endlessly about what might have happened,  and eventually you have to tell yourself firmly to get on with the story. But just occasionally something amazing happens.

Like this picture that quite suddenly appeared on my computer screen - a bolt from the blue.

If you know anything at all about Robert Burns, if you have been to any of the excellent museums where his life story is explored and celebrated, you will have been told that we don't really know what Jean looked like. We have her husband's word for it that she was 'clean limbed, handsome and bewitching.' Clean limbed, incidentally was a great compliment, albeit hard to translate. Slim and well formed, I suppose is as near as we can get. She had the 'handsomest figure, the sweetest temper, the soundest constitution and the kindest heart in the country.' Certainly she was a tolerant and sweet natured woman but she doesn't ever come across as a doormat. So presumably, she was a woman of great character. And she could sing. Beautifully. 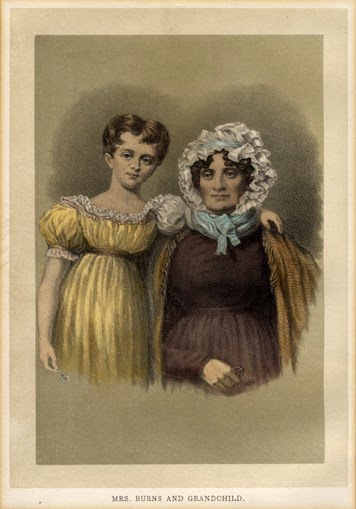 But most accounts of her life refer to the portrait on the right, with her grand-daughter, which is of an older lady in every way, the lines of pain etched onto her face. And although it's a strong face, it doesn't stand up well when compared with the pretty silhouette of Nancy McLehose (Clarinda) or the romantic depictions of Highland Mary who died young and tragically.

Jean lived on, of course, surviving her husband by many years, brought up her children (and another one of his), kept fresh flowers in the windows of her house in Dumfries and patiently welcomed in the pilgrims and the souvenir hunters, although she must have wished them far enough from time to time. I've learned one thing from all my research. If your dearest wish is to be immortalised as a romantic heroine, don't, for God's sake, outlive the love of your life. Die young, preferably of some fatal disease. Poisoning is a good alternative. But you could also consider leaping to your dramatic death. Male writers will love you for it. If you must live on, die in penury lamenting your lost love.

Jean did none of these things and look where that got her?

Anyway, you can imagine my excitement at suddenly seeing the much more youthful image at the top of this post - and tracing it back to South Ayrshire Council. It's currently in storage, but they are very kindly going to let me see it. If it is by John Moir, then it makes sense that it might have been painted in 1812 or 13 - which would put Jean in her late forties, still youthful, very smartly dressed, carrying a bit of weight after all those children - but an indisputably pretty woman, with those lovely candid eyes staring straight at you!

I've been able to discover a little more about Moir. He was born in Aberdeen, he went to Italy to study for a while, and then he set up his studio in Edinburgh where he produced some excellent portraits of the great and the good, including a splendid image of Willie Marshall the 'King of the Strathspey' whom Burns knew all about and called the 'first composer of Strathspeys of the age.'

I suspect he may have wanted to paint Burns, but by the time he was returning from Italy as a fully fledged artist in the 1790s, the poet was either ill or dying. In 1812, Moir was certainly exhibiting successfully in Edinburgh. Reviews speak of his great facility for painting children, but I haven't been able to find any examples online, although his work seems to crop up at country auctions from time to time. He didn't always sign his work either which complicates things. Examples seem to be largely in the possession of various councils.

There's some evidence that Jean was in Edinburgh around 1812 - James Hogg, the Ettrick Shepherd who seems to have had a bit of a crush on her, met her there. Her clothes in the portrait are intriguing - smart and fashionable, especially the bonnet and the beautiful shawl, which looks expensive. But then we know that she was a woman who liked nice things, and had once been married to a man who loved his wife to dress well, who bought lutestring silk for her dresses and ordered a very fine printed shawl for her from his friend who had set up business in Linlithgow. Her hair is still dark and curls around her face. Her skin is soft and clear. She looks both thoughtful and kindly. She is, it seems to me, a very attractive middle-aged woman - and it's easy to see the 'handsome and bewitching hussy' the 'delicious armful' lurking just below the surface. That, coupled with her obvious intelligence, certainly gives the lie to all those commentators who have seen fit to damn Jean with faint praise as 'not quite worthy' of her husband.

So what do you think?

Bill Kirton said…
Always a pleasure to read your books, Catherine, and this analysis (wrong word but it's close) of Jean is fascinating. I hope your closeness to her, your sympathy/empathy and understanding, and the character you're creating for her help to redress the balance of her 'worthiness'.
April 25, 2015 3:32 pm