The Last Days of Robert Burns 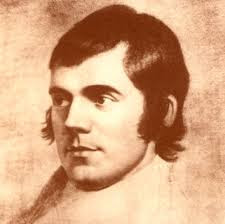 I'm reblogging this from Authors Electric today, because it's a significant anniversary - the day Robert Burns died, in the house at Mill Hole Brae, in Dumfries.

I can’t think of anything except Robert Burns at the moment – well, Robert Burns and Jean Armour – since I’m deep into a new novel about Jean and becoming ever more absorbed in the lives of the couple. It helps that I’m living in Ayrshire and it’s summer and the landscape here is very beautiful and – once you get off the beaten track – not a million miles from the way it must have looked in Burns’s day. It strikes me that I could probably write a whole other book about researching this novel. This has involved not just online research, but visits to the various places where they lived and worked. I've also used various old books, collections of his poetry and other volumes of the time, even if the connection is fairly tenuous, like the beautiful little Old Testament below - most of them bought on eBay or in our local saleroom.

There’s nothing quite like holding in your hands a book printed before or not long after the poet’s death – and most certainly while his widow was still alive.

But the poet himself died young, at the age of 37,  on 21st July 1796. I’ve been looking at pictures of his signature, once so bold and beautiful, but not long before his death, at the early age of thirty seven, it had deteriorated into a sad, frail scrawl, laboriously inscribed onto the page and with a little blot to one side. It haunts me, that signature from the beginning of the July in which he died, because it’s clear that he can no longer even hold a pen properly.


The bare facts of his death can still make me cry.

Some years ago when I was working on a play about his last days, down on the Solway Coast, I went to the Brow Well near Ruthwell in Dumfriesshire – a sort of poor man’s spa, a tank into which a ‘chalybeate’ spring drains. People would come to drink these waters, known to contain iron salts, in hopes of a cure.  There used to be a huddle of cottages, in one of which Burns took lodgings. He had been prescribed seabathing for what was called the ‘flying gout’: gout in the sense that he was in intense pain, flying because it was everywhere.

We can’t be sure exactly what killed him, but there is some evidence that he had rheumatic fever when he was young, that hard work on stony ground had placed stress on his heart and that endocarditis was the cause of his death. He seemed to suffer from what would certainly be diagnosed as panic attacks throughout his life, and quite possibly bipolar disorder or clinical depression as well. Certainly in those last months he had the high temperature, the chills, the night sweats, the intense fatigue, the muscle and joint pain that are symptoms of endocarditis. It all seems to have come on relatively slowly, which – I gather – is evidence of subacute pulmonary heart disease – something that he may have had for a long time. He was in intense pain, he was confused and worried, he could hardly eat – and the doctors had prescribed seabathing. 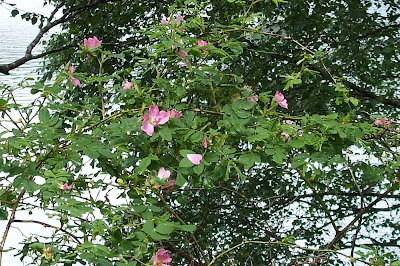 You have to understand that down on the Solway, there are mudflats and the sea is very shallow. People go flounder trampling there, feeling for flatfish with their bare toes. I went there on a June day, a few years ago, and found an atmospheric place of long horizontals. There was a mass of pink thrift, a natural rock garden, fringing the shore near the Brow Well, and then a vast expanse of glistening water, like polished metal, cold even in summer, into which he must have struggled and staggered, because he had been told that the water must reach his waist. God knows how he did it. I remember wondering why he didn’t die on the spot, but he even said it did him a bit of good, although I suspect it just numbed the pain.

He was running out of money and he was running out of time. People are fond of pointing out that he wasn’t exactly destitute, and he certainly wasn’t. But he was an exciseman, a customs officer, and this was an active profession. A few years previously, he had been riding 200 miles a week, even in the middle of winter, through hail, rain and snow. Now he was based in Dumfries, but it was still hard work. His writing wasn’t exactly lucrative and he had refused payment for his song collecting and writing, seeing it as a service to the nation, a nation that seemed rather stubbornly to resist helping him out in more acceptable ways. The fear of penury that comes with sickness, with the inability to work, and with a large family to support, must have haunted his last days, and the more sick he became, the worse his fears grew for that family. Jean was heavily pregnant with his last child, a son. She would give birth on the day of his funeral.


Earlier, he had written:
Waefu want and hunger fley me
Glowrin by the hallan en
Sair I fecht them at the door
But aye I’m eerie they come ben.

Woeful want and hunger frighten me, glowering by the porch (not quite, but there’s no equivalent!)
I always fight them at the door, but I’m terrified they’ll come in. 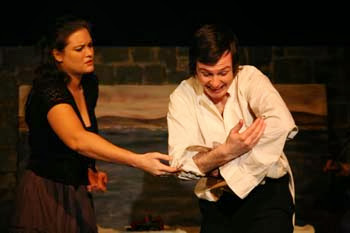 He was aye eerie they would come ben.


Also, he knew he had not set his papers in order and he fretted about his work. He knew that they were hawking ballads on the streets of Dumfries with his name attached to them, paltry pieces of work that he had not written and would have been ashamed of. He was desperately worried about leaving Jean to cope with all this. A haberdasher had threatened him with prosecution for an unpaid debt. The reality was that somebody would have paid it for him, people owed him money, but in his woeful state of health and mind, the threat must have loomed very large. 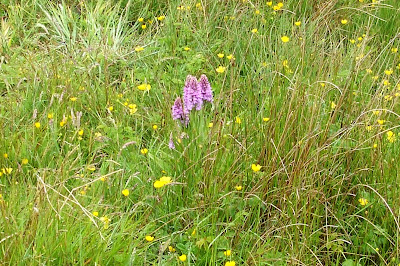 He offered his landlady his seal – a beautiful piece he had designed himself in happier days - if she would refill his bottle of port wine, because that and a little milk was all he could manage to swallow, but she refused the seal and filled the bottle anyway. She arranged with a local farmer to lend him a gig so that he could get back to Dumfries, some ten miles away. He could not have ridden. He could not have mounted a horse. On 18th July, he came home to Dumfries. He got down from the gig at the foot of the cobbled vennel where the family lived, and had to be helped – oxtered - up to the house by Jessie Lewars, a young neighbour who was helping Jean. He could not walk alone. They sent the children out with friends to keep the house quiet for him. He took to his bed, and lived only three more days, dying on this day in 1796. Jessie made the children gather the wild flowers he had loved to strew over the body.

Then, of course, everyone came scrambling out of the woodwork to attend the great poet’s funeral and to beg, borrow and steal scraps of his life from his widow. They never stopped harassing her throughout her long life, and she treated them all with patience and understanding.

I suppose we – and I don’t except myself here – have been doing it ever since.

My novel about Jean Armour is due for publication some time next year, but if you want to see what else I've written set at much the same time, you could try The Physic Garden, available as an eBook and in paperback from, as they say 'all good bookstores' as well as online, here in the UK and here in the US.
Anniversary Ayrshire Dumfries Jean Armour Robert Burns Solway Coast The Brow Well