October 10, 2019
This is a picture of my Polish grandmother. I met her very briefly when she came to spend a couple of weeks with us in Leeds. I can't even remember the exact year when she came, but I think it must have been when we had moved from my grandparents' house in Whitehall Road to a chilly flat in an old vicarage in Bellevue Road, which would place it some time in the late 1950s. You can read about some of this in my recent book, A Proper Person to be Detained, because although that book is about a murder in my family in 1881, I moved the story forward into my own childhood, in an effort to get some perspective on those long ago events.

What I didn't tackle though, was the troubled relationship between my father and his own mother, Lucja.

My middle name is Lucy. I was named for her.

One night last week, I woke up with a start and remembered the food parcels. It may have been because I had just said - not entirely in jest - that in the event of a no-deal Brexit, we might have to ask our son, working in the EU, to send us medicines. Perhaps that had triggered the memory, because I hadn't thought about Lucja's food parcels in more than forty years.

After the war, when my refugee dad was in a resettlement camp in Yorkshire, like so many displaced persons, he hadn't the foggiest idea whether any of his family had survived. For many years, we believed that his father, Wladyslaw, had been sent to Siberia and had died there. As it happened, that wasn't the case, but it took a great deal of research before we found out the true story. He didn't survive. He was never going to come knocking on our door. His tragic story is one for another day, another post. Maybe the book or books I seem to be edging towards writing if I can find a way into them.

But in those post war years, the Red Cross did sterling work in trying to reunite families. Eventually, we found out that dad's beloved Aunty Wanda had survived and was still living in Poland with her husband, artist Karol Kossak, in a spa town called Ciechocinek. I visited them and their daughter Teresa in the  early 1970s, and immediately felt at home with them.

In the late 1950s, we also discovered that Lucja was alive, living in a town called Wałbrzych in the south west of Poland. She and my father corresponded, and because times were hard in communist Poland, especially for elderly ladies of very limited means, we sent food parcels to her. I remember the shopping, the careful wrapping, my dad filling in endless forms, taking them to the post office with my mother, hoping that the things actually got there, because pilfering at the borders was rife. As were food shortages.

And then Lucja came to visit.


It was not, on the whole, a success. I find myself digging around in my memory, trying to analyse the tensions that I, as a little girl, could only have been dimly aware of. The word that best describes it might be disappointment. I think she was disappointed, had been disappointed and angry for years - angry and unwell and disappointed. She had expected more from the visit. She had expected much more from life. And she had lost everything except her life.

She was, I believe, the child of a wealthy pharmacist, in the prosperous Polish city of Lwow, when she met and married my grandfather. You can see them together in the picture below, possibly taken in the summer of 1929 when my dad would be about three: handsome Wladyslaw, who always reminds me of Maxim in Daphne Du Maurier's Rebecca and pretty, plump Lucja in her early 20s, with her summer dress, her pearls and her hat and her little son, Julian, still in his traditional girly baby clothes and haircut. 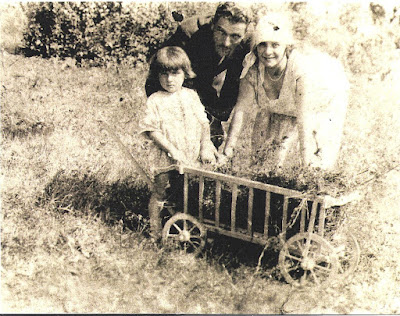 Spoilt Lucja who got her own way in everything.

She had always expected more from life. The picture at the very top of this post shows her at about the same time or just a little earlier - newly married, well made up, glossy in her fur coat. Uncannily, I recognise myself in her eyes, and her hair. She certainly gave me her hair.

The family were ostensibly Catholic, but the name Szapera suggests a Jewish heritage somewhere along the line. The family also claimed Hungarian forebears. Wladyslaw, who had a reputation for immense charm, must have met her socially in Lwow and swept her off her little feet. He was wealthy too - on paper at least, although not so much in hard cash.

The family were 'szlachta': the old, minor aristocracy. Wladyslaw's mother, Anna Brudzewska, had been from an even more distinguished family. Wladyslaw had inherited the estate from a wealthy uncle and stood to inherit another place in Prszemyslany.  He had a nice house, a ruined mansion, an ice house, the only car in the district, plenty of land, prospects - and a pet monkey. Lucja must have thought that all her dreams were coming true.

They were very young: Lucja was born in 1906, and Wladyslaw in 1904, which made her only twenty when her son was born. I'm sure for a while they were madly in love.

But she was a city girl, and I imagine that she soon found the countryside not at all to her liking. I suspect she didn't like the mud or the flies or the horses or the dogs or the guests that stayed for days on end. Besides, Wladyslaw was not quite as rich as she had believed. He was always thinking up ways of making money: growing mushrooms in the cellars of the old manor house at Dziedzilow that had been burned down in some previous conflict or inventing perpetual motion machines that - of course - didn't work.

She had probably been used to city life and entertainments, nice clothes, a little luxury, and here she was, marooned in the country, and then doubly marooned after my dad was born.

I suspect too that my grandfather found that he had fallen for a pretty face but, like Mr Bennet in Pride and Prejudice, had found himself married to a rather foolish woman. This seems harsh, but my father once confessed, reluctantly, that he had always been much closer to his father and his aunt Wanda than he ever was to his mother. They seemed to have very little in common.


Nevertheless, my parents went through the complicated and stressful process of inviting Lucja for a visit. From the start, it was clear that she disliked postwar Leeds intensely. When I think about it now, I'm very sorry for her. She could speak no English and my mother no Polish, so communications were difficult. At home, she worked in one of those little kiosks that sell cigarettes and bus and tram tickets. She suffered badly from arthritis and lived with somebody we knew as Aunty Nusia. I think, although I can't be certain, that this was her sister but it may have been a cousin.

She had expected us to be rich. We were very far from that. She missed Nusia. She didn't like the food, she didn't like my mother, I'm not even sure that she liked me very much. She must have been very homesick, even though she didn't like her home much. Children bored her. The fortnight was spent mostly playing cards with assorted patient Leeds relatives, while she smoked cigarettes and grumbled. She went back with more food and more cigarettes, as many as she was allowed to take. The correspondence continued, as did the food parcels and the medicines for her arthritis that my dad managed to acquire. I believe she died in 1971, just before I went to Poland myself, and met my other surviving relatives.

Many years later, dad told me all about his childhood, but said very little about his difficult relationship with Lucja.  I think it saddened him. He had been a country child, heart and soul, brought up among the trees and flower meadows of this part of Poland, loving dogs and horses, riding almost as soon as he could walk, ski-ing in winter. Reading a great deal.

He adored his father, but at some point in the 1930s, Wladyslaw began an affair with the wife of a local schoolteacher. I think my dad saw this as a betrayal, naturally enough, although he was too young to articulate it properly.

Just on the verge of war, Wladyslaw and Lucja separated, and Lucja took my dad, Julian, back to Lwow. He didn't want to go. I recently found the address among his old papers and looked it up online. The apartments are still there, and seem quite smart. Wladyslaw visited them there as often as he could and as a boy Julian would often travel back to Dziedzilow to spend holidays there. He was always happier in the countryside than in the city. Always happier with his father or with his Aunt Wanda and Uncle Karol and other family members who lived nearby.

Later, more precariously, when the city of Lwow and the house at Dziedzilow were under occupation and his father was in the army and then in a Stalinist prison, Julian would travel back to the village to stay with his beloved nanny. She was a Polish girl married to a Ukrainian so he might have been in extreme danger, but he was never betrayed. Instead, the local Ukrainians sheltered him.

In due course, he would come back to the city with eggs, apples, meat.

alison333 said…
This is a delightful read, Catherine. I can see why you'd want to write more around all of this. It speaks of a life which no longer exists and of a time long gone. I'll look forward to the book(s)!
October 10, 2019 8:38 pm

spabbygirl said…
Oh wow what a wonderful story! It'll make a great tale & I look forward to reading the rest. My mum was similar in that as a young woman she lived in Hyde Park with all the wonderful facilities in central London, then got married and moved to a huge council estate in south London. she never forgave dad, though that wasn't their only problem. Still, that's to keep for another book though!!
October 12, 2019 10:38 pm