Readers, especially female readers, seem to fall into two camps: those who love Wuthering Heights and those who loathe it. It is the veritable Marmite of novels and there seldom seem to be any half measures. I've discussed this phenomenon elsewhere on this blog, but for various reasons, I find myself writing about it again - so here we go!

A little while ago, I discovered that a good friend had never read it, so I bought her a copy. I honestly don't know if she will like it or not, and I really don't mind. I'll still love her even if she hates it, because we all bring different things to fiction, and one woman's meat and drink is definitely another's poison. But when I was looking online for a nice copy of the book, I noticed one or two reviews that were essentially saying, Heathcliff is not my idea of a romantic hero - and I wanted to reply, look, Heathcliff isn't even Emily's idea of a romantic hero, if she ever had one, which is debatable.

But I know why they are saying that. Because they've read Jane Eyre as well, and they keep comparing Heathcliff unfavourably with Mr Rochester, and the million romantic tales that came after.

I reread Wuthering Heights every year, and never tire of it. I've been aware of it since I was a child. It was my late mother's favourite novel, we lived in Leeds, and even when I was very young, we would take the bus out to the moors, including to Haworth itself. So the landscape of the novel feels familiar, part of something very dear to me. But from the time when I could first read it - when I was really too young to understand it - I think I realised that it was an extraordinary book.

Yesterday, in renewed Wuthering Heights mood, I posted on Facebook a link to a most excellent episode of Melvyn Bragg's In Our Time in which various experts discuss the novel. And if you've never read it, can I recommend that you listen to this first, if only to manage your expectations. They don't pull any punches. This is not a romantic novel in any accepted sense of the word. It is hardly even a love story, although there is a kind of love at the heart of it. But just what kind of love?

This is a story about obsession, passion, cruelty, revenge and downright sadism. It's as harsh and unremitting as the landscape in which it is set. As the academics are at pains to point out in Bragg's  programme, it hits you hard with disturbing and often physically brutal events on just about every page. It's not a cosy or comfortable book at all. It was shocking back when Emily wrote it, and it's shocking now.

You aren't meant to like most of these people.

Perhaps most important of all, you should remember that Emily, genius Emily, writes it in the voice of two somewhat unreliable narrators: poor, polite Mr Lockwood who, as one of those on the programme remarks, thinks he's in a Jane Austen story and soon finds that he isn't; and Nelly Dean, working for the family since girlhood, who relates the events as factually and vividly as she experienced them at first hand, but - like most of us - still can't entirely comprehend the nature of that experience. There is a third narrator, of course: Catherine Earnshaw, whose words we read in the early part of the novel, and whose words we hear later on. She, who betrays her own heart and soul and destroys herself in the process, may still be the most reliable narrator of the lot, perhaps the only genuinely reliable narrator of the whole book, even allowing for the fact that she deceives herself.

I find myself trying to explain the nature of this book from time to time, because when you love something as much as I love it, you want other people to love it too. And I always go back to the scene where Catherine, now married to Edgar Linton, tries to warn her sister-in-law, Isabella, about the true nature of the returned Heathcliff.

It is Isabella who first makes the dreadful mistake of imagining that Heathcliff is a rugged Byronic hero, a wounded but misunderstood older man, (a bit like Mr Rochester) who can be redeemed only by the love of a good woman. She fondly imagines that 'he has an honourable soul and a true one'.

Nothing could be further from the truth, and Cathy tells her so in no uncertain terms. 'Nelly, help me to convince her of her madness' she says. 'Tell her what Heathcliff is: an unreclaimed creature, without refinement, without cultivation: an arid wilderness of furze and whinstone. Pray, don't imagine that he conceals depths of benevolence and affection beneath a stern exterior! He's not a rough diamond - a pearl-containing oyster of a rustic: he's a fierce, pitiless, wolfish man.'

Emily too could not be clearer. He's as hard as stone, a changeling, the 'beast' of fairytale, but one who will never be transformed by love to live happily ever after. Nelly uses the words 'ghoul', 'goblin' and 'vampire' to describe him. 'Where did he come from, the little dark thing, harboured by a good man to his bane?' she asks, aware, even as she thinks it, that it is a 'superstition' that does not sit well with her religious beliefs.

Heathcliff and Cathy, who together might make one less dangerous whole, are torn apart, through force of circumstance and - let's face it - by their own actions, especially those of Cathy herself. Heathcliff tells her, relentlessly and on the point of her death, 'because misery and degradation and death and nothing that God or Satan could inflict could have parted us, you of your own will did it. I have not broken your heart - you have broken it and in breaking it, you have broken mine.'

Whether or not you believe he has a heart to be broken, the central truth of the novel lies, I think, somewhere in the constant - wonderful - references to the landscape. An ailing Cathy, describing a lost time with Heathcliff, remembers the natural rather than the human world: the lapwing: 'bonny bird, wheeling over our heads in the middle of the moor. It wanted to get to its nest, for the clouds had touched the swells and it felt rain coming.' And again, yearning for her old home at Wuthering Heights: 'that wind sounding in the firs by the lattice. Do let me feel it - it comes straight down the moor - do let me have one breath!'

The schism at the heart of the book most closely resembles some terrible, destructive physical event. 'I'm sure I should be myself were I once among the heather on those hills' says Cathy, 'exiled' as she terms it, in Thrushcross Grange. And later, Nelly describes the couple as making 'a strange and fearful picture. Well might Catherine deem that heaven would be a land of exile to her unless with her mortal body she cast away her mortal character also.'

At the very end of the novel, even as Joseph sees 'the two on em, looking out of his chamber window, on every rainy night since his death' or the small boy cries because he can see 'Heathcliff and a woman yonder under t' Nab' and the poor little scrap dare not pass them (as who would?) soft hearted but prosaic Mr Lockwood gazes at the graves and wonders how anyone could imagine 'unquiet slumbers' for them.

You can't help thinking that perhaps all these things can be true at once. Peace can only be restored with the death of the main protagonists and their reunion beyond the grave, just as balance is restored in the next generation by the ordinary (and by now very welcome) humanity of young Catherine and Hareton.

Some time ago, I wrote a novel called Bird of Passage. It is, I suppose, my own homage to Wuthering Heights and came about as a result of my obsession with that novel. I couldn't help but write it. It is by no means a rewriting of that book - how could it be? How would I dare? But it is definitely inspired by the novel, or as one reviewer points out, it is 'a dialogue with the older novel'. It is a story of cruelty, loss and enduring love. Although again, what the nature of that love might be, and how desirable it might ultimately be, I'll leave you to decide for yourselves. 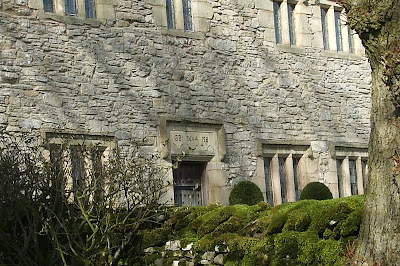 Alison Bell said…
What a great post Catherine and could easily have been included in Bragg's R4 programme which offered very helpful insights into this disturbing book and its characters.
April 25, 2020 6:35 pm

Tracy Harvey said…
You've inspired me to read it again Catherine. I was quite obsessed with Cathy and Heathcliff when I was young, and my obsession was consolidated by Kate Bush's song. When I read again in later life I was horrified by Heathcliffs cruelty to Isabella, I saw him differently then. I wonder where Emily bronte got her knowledge of a personality like Heathcliff ? And of co-dependency at that that time? You need an awful lot of insight into human nature to write that book and understand a personality like Heathcliff. Thank you for a very interesting blog.
April 25, 2020 10:01 pm

Kim Johnson said…
Love this. I too read wuthering heights each year and visit the parsonage once or twice or year. You have my thoughts in writing. Thank you
May 01, 2020 3:08 pm