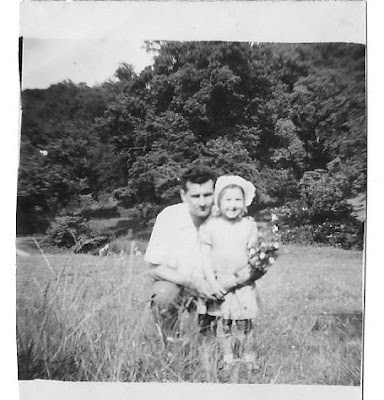 Last year, when my new book A Proper Person to be Detained was published by Saraband, and when I began to do various book events I realised that as many people were asking me questions about my Polish dad and how he came to Britain, as about the Leeds Irish side of the family, which is mostly what the book is about. My refugee father came to Yorkshire at the end of the war, via Monte Cassino, having lost most of his family and almost his own life. There was nowhere to go back to.

In that book, I wrote: 'Dad was an alien. It says so on his papers. I have them still, stored in a box in the room where I write. I've been sifting through them more than once, recently, in the hope of reinstating the Polish nationality I acquired at birth, by blood rather than location, and then lost again. ... * When I was born, dad's status made me half-alien too. Actually, it made me three quarters alien, given that my mother was half Irish. As soon as she married him, my mother acquired her husband's nationality as well as her own. So there we were, aliens by virtue of birth or assimilation in this brave new post-war world. The borders had arbitrarily shifted and my father's home wasn't even in Poland any more.'

Today would have been dad's 94th birthday. He died in 1995 with my mum following three years later, and I still miss them. Earlier today I took a little posy of garden flowers up to the cemetery outside the village: aquilegia mostly in shades of pink, blue and purple, because we're between seasons now, in that time between spring and early summer, when winter is still capable of putting in the odd appearance, even in May. It was a chilly, blustery day and I was in my winter woollies and padded jacket, but it was a good walk, past sweet scented may blossom, cow parsley, pink campion in the hedgerows and an accompaniment of birdsong all the way. Dad would have approved. He loved the countryside and made me love it too.

It's been a funny old day. We're in lockdown here in Scotland, but the county is in turmoil with - not to mince matters - a regular shitshow of a government at Westminster. I've spent half the day in a rage, and half of it remembering my warm, wise dad. But Dad, who knew a fascist when he saw one, always cautioned that totalitarianism could happen anywhere and at any time if conditions were right. After all, Stalin was responsible for his father's death, while the Nazis saw off most of the rest. Dad was not at all bitter. He had, I think, taken a conscious decision to live his life with love rather than hate. But injustice - that was a different matter. I never once saw him lose his temper at home. He was the most generous and kind hearted of men. But injustice, greed, cruelty and bullying: those were things that he found intolerable.

I've been thinking about him a lot today.

If you want to read the story of my Irish family history, but of so much more - you can buy the paperback of a Proper Person to be Detained from the publisher, Saraband, or download the Kindle version, here.

Hannah Bateman said…
I know by your story you had a loving childhood and you're dad was a wise man. Many successes in your work! Hannah Bateman

Anka said…
This struck a chord - I found my dad's alien card when I was sorting through his things. He'd have been 95 if he were still with us.