When the gorse is in bloom, kissing's in season. 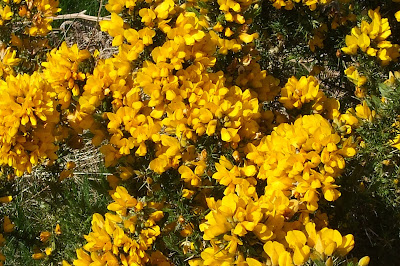 Drove past 'Trump Turnberry' today, as always noting its faint resemblance to the Overlook, on the way to and from one of our local farm shops for tatties and carrots, freshly dug this morning. The carrots smell like a completely different vegetable and I'm going to make some of them into a salad with the last apple from the garden and a few cashew nuts. Too good to cook. Actually, it's the last-but-one apple from the old Golden Noble apple tree at the bottom of the garden. It's so old that it's on a two year cycle, a rest year and a fruiting year. This year was a rest year and it managed about six apples. I was waiting for the last huge apple at the top of the tree to fall, but by the time I got to it, it was a hollowed out shell - the birds had got to it. I couldn't begrudge them it. They give me so much pleasure.

The whins are in bloom. That's the Scots word for gorse. And as the old saying goes, when they're in bloom, kissing's in season. Because they're always in bloom. But in spring, they are so bright that they dazzle your eyes and the scent of coconut is overwhelming. Now, they're strangely and sporadically in autumnal bloom - one or two bushes covered with vivid golden flowers, among several others with no flowers. Throughout the winter, here in the warmish west, you'll see a few flowers lingering here and there and then slowly but surely, you won't be able to tell whether they're last year's clinging on, or the beginning of spring.

Always a cheering thought, because I hate November, and I hate mid-covid November even more, because usually there's Christmas to look forward to, but it looks as though we might be cancelling Christmas in this house, anyway.

All the same, who wouldn't be cheered by the gorse? And did you know that you can cook up the blossoms and use the resulting liquid to flavour cakes and things? I didn't, until I watched the wonderful Nora On Food. I haven't tried the cheesecake yet, but I might make a perilous gorse flower expedition and give it a try.