I've just finished reading a book called Negative Capability by Michele Roberts - a memoir of a difficult year in her life. Among the memorable passages was one dealing with writing classes.

She points out that 'most of the students equated novels with producing marketable commodities. They were obsessed with writing correctly to certain agent identified, agent approved agendas.' A little further on she points out that 'they trusted literature less than self help writing manuals.' Roberts goes on to remark that she can't stop herself from bursting out in 'defence of making art' which cuts no ice with the students.

I found myself highlighting these passages and going back to them with sympathy and recognition. I too have taught writing classes and workshops. Over the years, I've seen the balance shift from the desire to learn about the craft of writing to an obsession with commodity and some hypothetical market - the pot of gold at the end of the writing rainbow.

I used to teach creative writing for the Workers Educational Association. We lost funding, but eventually, because I was working in what was termed an 'area of social deprivation' (it was certainly that, but the people were the nicest, funniest, most talented bunch I've ever worked with) - the local council offered to supply the deficit. Except that suddenly they wanted an end product. It wasn't enough to encourage people to write in different ways, whether it was prose or poetry or drama - and we had people working on all of these within the group. No, there had to be an outcome. A thing at the end of it. Hence a great many funding applications that involved the production of box ticking anthologies.

It marked a shift from a perception of the value of doing something for itself alone, to doing something only if there was a tangible result. When the relative impossibility of that tangible outcome became obvious, they decided that health and wellbeing was enough of a thing, so you had to demonstrate that you were prepared to be a cut price and largely untrained mental health professional as well. This is an attitude that is now so deeply and disastrously embedded in the bodies set up to support the creative industries that I doubt if we will ever manage to switch back to valuing participating in the arts purely for its own sake.

I play the piano because I love doing it. I'm never going to be a concert pianist. I learn to play things because it gives me a bit of a buzz, and I suppose that's a wellbeing outcome of sorts, but frankly, I do it for the sheer enjoyment of playing and that's reason enough. I do it to do it. 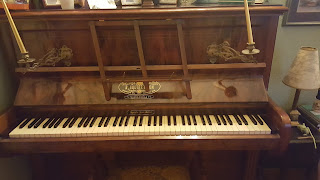 This is why, although I'm happy to give talks about my fiction, about the experience of writing and publishing, and also about the practicalities of research, I'm no longer keen to engage with the highly prescriptive aspects of a writing life, such as all those social media posts about the dos and don'ts of constructing query letters. And as for those agents who post scathing online take downs of terrible-query-letters-I-have-known for a bunch of sycophants to laugh at, in hopes of currying a bit of favour ... don't get me started!

The harsh truth is that, even if you do manage to land an agent in the net of your perfect query letter, there is no guarantee at all that that agent will find you a publisher. But if you write to the specifications of a string of other people: the agent's reader, the agent, the publisher's reader, the publisher, the editor, I'm not at all sure that what will emerge will have done your development as a writer any good at all. Add to that a clutch of so called beta readers - a term from the video games industry that doesn't mean what people think it means -  before you even start on the long road to finding an agent, all with varied opinions about what you should and shouldn't be writing, and you'd be better to do a whole lot more reading and a whole lot more writing. As Roberts so succinctly puts it, find your own way into 'making art'.

That's what Stephen King recommends here, and whether you like his books or not, I reckon he's right about this one.

Which is not to say that a good editor isn't a wonderful thing: one who asks all the right, difficult questions and allows you, the writer, to rework and to learn a lot about your own craft in the process.  But that's a very definite professional skill, and not one usually possessed by an opinionated literature graduate intern working for peanuts for an agency or publishing house.

The harsh truth is that the pot of gold at the end of the publishing rainbow is as elusive and mobile as the mythical one. And as William Goldman accurately states, in his Adventures in the Screen Trade, 'nobody knows anything'. Unless you're one of that growing band of celebrities in another field deciding that they've always wanted to write a book, the really big hits tend to come quite suddenly, out of left field, unpredicted by the industry itself. Not just unpredicted, but often rejected. Then they all want more of the same, until the next big hit comes along and takes them completely by surprise. If you're ready to ride that new wave - which tends to be a matter of coincidence and luck rather than anything else - good for you.

Otherwise, write what you love, write what obsesses you - and to hell with the rest. If you don't, you may find yourself missing the beauty of the rainbow, in pursuit of an elusive pot of gold that will probably turn out to contain a few dried leaves.