Sitting at this desk, high up in the house, facing south, is a bit like being in the wheelhouse of a ship in this stormy weather. Every so often a flurry of horizontal rain is flung against the windows. Just like it's doing now.
I'm tired.
In an old house like this one, the wind makes the house sound as though all 200 years of previous inhabitants, and a few from the house that was on the site before, are wandering around the place, pushing and tapping at doors, randomly, thumping on the stairs, creaking around on not-so-silent ghostly feet. It is just the wind, of course. Although if you think the wind is harmless, you've never read O Whistle and I'll Come To You. Don't do it. Don't blow the damn whistle.
Anyway, I came to bed late, my husband was asleep, and I made the huge error of closing the bedroom door. At that point, the night was calm, a wonderful full moon was shining. And I closed the door.
I was woken at 2.30 am by the creak and muted thump as the door swung open a little way and closed itself again. This happens all the time, whenever there's a wind blowing. Just that I forget that on windy nights, I have to leave it open for the wind (or those previous inhabitants) to come and go as they please.  I was too cosy to get up, drifted off back to sleep, but only managed half an hour before more irritatingly random creaks and groans, this time from both doors into the room, woke me again - my office is just off the bedroom.
So I had to get up and make sure the doors were open, by which time it was blowing a hoolie out there, and the various loud thumps and bangs and creaks from the rest of the house, as it adjusted to the weather, kept me wide awake. It's not frightening, you understand. Just irritating enough to banish sleep.
I read for a bit on my Kindle. Coincidentally, I was reading Roger Clarke's A Natural History of Ghosts. I can recommend it, just not, perhaps at 3am in a very old house in the middle of a storm!
I did doze off eventually for a couple of hours, only to be woken at 6.30 by my husband, who had had a disturbed night too, deciding that he had had enough and creeping downstairs. I followed him. The heating came on, and we sat clutching big mugs of tea - hurriedly made in case the power went off - it still could do just that - and watched Singin' In The Rain. It seemed appropriate somehow. And very cheering.
This Hallowe'en, do I think the house is genuinely haunted? I don't, really. It's old and friendly, and if any of the previous inhabitants are lurking about the place, they're very friendly too.  Although interestingly, one of my sisters-in-law stayed over in what became our son's bedroom years ago, and vowed never to do it again. I think it was the creaking doors again. It does sound exactly like somebody trying to get in. Charlie grew up with it and doesn't even notice it, although when he was living at home, even he got into the habit of leaving the door ajar on stormy nights, before he tried to get to sleep. 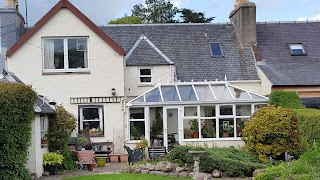