April 22, 2012
Recently, I did a guest interview for Rosemary Gemmell's excellent Reading and Writing blog. Rosemary asked me about researching my new novel, The Amber Heart and wondered how much my Polish background had informed the writing of this book. It brought to mind all over again, my charming great uncle Karol Kossak - that's him above, trying to squeeze his immensely long legs into a small horse drawn vehicle! 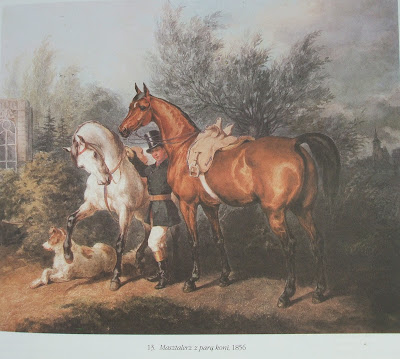 Karol was married to my Polish grandfather's elder sister, Wanda Czerkawska. There were five children in the family: Zbigniew and Boguslaw, Wanda, Ludmilla and my grandfather Wladyslaw. All of them, except Great Aunt Wanda, fell victim to the war in one way and another. The two elder brothers died in some border skirmish. Ludmilla, pretty, flighty and flirtatious, married a Polish army officer but was imprisoned in Auschwitz and died there. Wladyslaw was imprisoned by Stalin, released, and died of typhus on a long, enforced march East. Wanda met and married Karol Kossak before the war - he and my grandfather were good friends. Karol wasa younger member of a family of distinguished Polish artists, of which Juliusz and Wojciech Kossak are perhaps the best known. They painted battle scenes, were fabulous equestrian artists and all in all were a fascinating, if slightly Bohemian family. 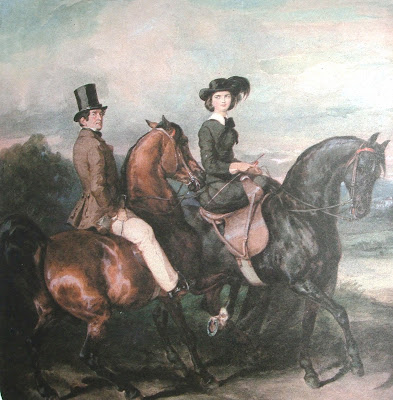 My dad, who was demobbed in the UK after the war and stayed as a refugee, finally managed to get in touch with some of his family through the Red Cross. This was years later, after he had met and married my mother, and quite a long time after I was born. His mother died not long after this, but he stayed in touch with the Kossak side of the family.
I went to Warsaw by train when I was in my twenties to visit Karol and Wanda, who were living in a small spa town called Ciechocinek, and their daughter Teresa, who was living in Warsaw and working as an animator.We had to cross East Germany to get there, and the guards came aboard with dogs and guns! Karol was like a throwback to another age. I had never met anyone quite like him. Later, I saw a production of the Merry Widow in Vienna, and - as I told Rosemary - Count Danilo reminded me irresistibly of him. Karol was utterly charming. He would take me out walking or for rides in the horse drawn droshkis that were used as taxis in the town where they lived. The drivers would all doff their hats to him. We would go to cafes for coffee and cognac and he would draw little sketches on paper napkins for me - I have them still. He would kiss my hand and generally behave exactly as a romantic hero should. I think I was in love with him, even though he was in his eighties.
My Polish was about as bad as his English so we spoke in French which I could manage - and which he had spoken in pre war Poland.  He told me stories about the grandfather I had never known - how he was a 'ladies' man' - how he laughed a lot, was fond of practical jokes, was generous, brave and an excellent horseman, one of the last of the Polish Lancers. 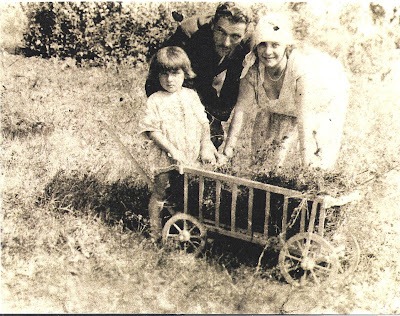 When I came home, I wrote poems about Karol, and then a couple of radio plays reflecting my Polish background, but I always knew that eventually I would write a historical novel, or perhaps more than one, set in Poland. The Amber Heart is that novel and Karol found his way into it as Julian – the heroine’s delightful brother-in-law.


But sometimes, a poem still says it all - and here's the poem I wrote for Karol, not long after I came back from Poland.

I remember
talking with my uncle Karol,
walking arm in arm
on Polish evenings when
mist spread over flat fields
and women were burning
the last of the potato leaves.

We wrinkled our nostrils.
It was a kind of myrrh for us
preserving the moment yet
bitterly telling time.

There's no cure for it.
Though I hurtle through youth
for love of him
he’s gone too far before.

If you find yourself reading this blog on 23rd or 24th April, you can get a FREE download of the novel, on Amazon Kindle, in honour of World Book Night. If you look at the Authors Electric Blog, you'll find an interesting and eclectic mix of experienced and award winning writers, all of whom have decided to go for Indie Publishing in one form or another.
http://authorselectric.blogspot.co.uk