Orange Blossom Love and other stories ...

October 24, 2013
I've been so busy with all kinds of writing over the past few weeks that I've hardly had a spare moment to update this blog. Here in the West of Scotland, we're in that time between seasons when the trees are beautiful - especially the rowans - but the days are shortening all the time. Soon our clocks will be going back an hour and then the nights will seem very long - and very dark.

BUT I've been cheering myself up with working on the first in a series of unashamedly romantic novels, set largely in the beautiful Canary Isles. And really wishing I was sitting on the deck of a catamaran in the sunshine. But if I can't do that, then the next best thing is to write about the islands, and dream about them. And share some of those dreams with readers. 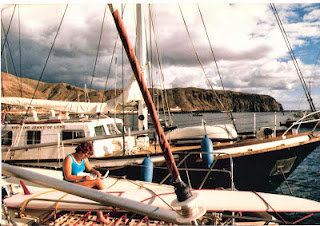 This all began many years ago as a short story called Sardine Burial which - coincidentally enough - has just been republished in eBook form by the excellent Hearst Magazine Company: one of four short stories in a new mini collection of my stories, available on all ebook platforms - but you can find it here on Amazon in the UK and here on Amazon in the US. I love the way Hearst are embracing short stories in this form - mainly because I'm a big fan of the short story myself, not just as a writer, but as a reader.

I experimented with Sardine Burial as a radio play - it was actually produced on BBC R4 years ago - but I really wanted to write it as a novel. Its first incarnation was published and pretty much sank without trace. I'm quite glad, because it wasn't ever the way I really wanted it to be. It's a romantic story, no doubt about it. And why not? But what I really wanted to write was a novel about two people from quite different backgrounds, who fall in love and marry in haste. What happens next? Do they repent at leisure, as the old adage would have us believe? So I went back to the beginning and began all over again. Especially with my hero - lovely Luis - who plays the guitar and sings - and cooks, too. OK, OK, he's a man in a million. But he has his faults. As you'll find out if you read the book.

That's what I've been writing about in Orange Blossom Love.  (Try THIS LINK  instead, if you're in the US!)  This is one of the more sensuous and unashamedly romantic pieces of writing I've ever done. It's a very grown up love story. And I'm afraid it does end on a bit of a cliff-hanger. There was no way round it. You'll see what I mean when you get there! But I'm hoping to be able to get Part 2, Bitter Oranges, out on Kindle in time for Christmas. Or very soon after.

My only worry is that there is an important - and quite different - project which might just possibly get in the way. I'll tell you a bit more about that later because it's very exciting too and it will have to take priority for a while.. But if I manage my time properly, I should be able to do both. And maybe winter in Scotland will be a very good time to visit the gorgeous, sunny Canary Isles, even if it's only in my imagination! On the other hand, Bitter Oranges is set partly in Glasgow. So I might just have to make do with Luis, who brings his own brand of sunshine with him! Always has. Always will.