An Extraordinary Christmas (or Two)

December 07, 2020
This is a picture of my great aunt Wanda Kossak. She was the elder sister of my grandfather, Wladyslaw Czerkawski, the grandfather I never knew, and about whose life I'm writing a book.

I first met Wanda in the1970s, when I travelled by train to Poland and stayed with her and her watercolourist husband, Karol Kossak, the last in a line of distinguished Polish artists that included Karol's grandfather, Juliusz, and his uncle, Wojciech. My enchanted autumn with them is a subject for another post. My Polish was about as basic as their English, but my French was better, and as with many Poles of their generation, their French was good, so that was how we conversed most of the time. Over the weeks of my visit to their apartment in a spa town called Ciechocinek, I got to know and love them.

They were no longer young, and by the time I returned to Poland to spend Christmas there, Karol was dead, but Wanda had a long life, from 1896 to 1983. In fact, I had two Christmases in Poland, although they have somehow become fused in my mind and I will have to rummage through my box of old letters before I can properly distinguish one from another.
The first time was when I was teaching English in Finland. Flights home to Scotland were very expensive so I travelled across the Baltic to stay with my Polish relatives. The second time was in the late 1970s, when I was working for the British Council, teaching English at Wroclaw University. Our longish winter vacation was in February, which meant that, once again, I headed for Warsaw, to spend Christmas with my father's cousin Teresa Kossak, her partner Andrzej, her mother, Wanda, and a whole heap of Kossak relatives, with whom, sadly, I have since lost touch. (If any of you are reading this, I'd love to hear from you!)
Those Christmases have become a series of vignettes of a time long past. So here's what I remember.
Warsaw was cold. Colder than Wroclaw, so much further south. There was frost and snow. There was a cheerful covered market, smelling of apples and dill pickles and cheap tobacco and that wonderful smoked 'mountain' cheese that I've only ever managed to buy in Poland.
Teresa's tiny apartment was beautiful, with her collection of porcelain cups, her bright textiles, her books and artworks. In fact it sometimes strikes me that much of what I've decorated or planned since then, in our own house, has contained an echo of that time, in that warm, cramped, hospitable flat that I envied and wanted to emulate. She and Andrzej kept dogs that were much too big for the place, and since I was extremely allergic, they borrowed another apartment from a friend for me to sleep in, so that I shouldn't have to wheeze too much! 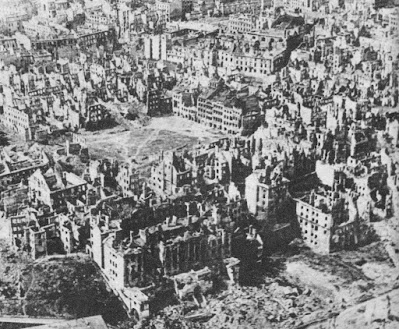 I remember visiting the studio of one of their friends, an artist in amber, and the pungent scent of old forests from the polishing. He took me for a magical walk round the newly rebuilt old town. He must have been in his fifties, although he looked younger. It was evening, one of those clear, cold evenings, when the light leaches slowly out of the sky, and trees and buildings are sharply silhouetted against a golden sky. We walked and talked. His English was fluent and he told me something of the history of each place. He told me that he had taken part in the Warsaw Uprising when he was very young. Many corners of the rebuilt city held sad memories for him, where this or that friend or colleague had fallen.
'I can still see them,' he said. 'Ghosts everywhere.'
Warsaw was not bombed from the air. It was blown up from the ground, erased from the map. But it was rebuilt, and I was privileged to see it for myself, and to see it through his eyes as well.
I had a proper Polish Christmas Eve at the Kossak house in - I think - Zoliborz. This is always a lengthy meal with many meatless courses, and makowiec - the most delicious Polish poppy seed cake - at the end of it.
The house was crammed with Kossaks of all ages.  These included autocratic, intelligent Aunt Joanna Skarzynska, Karol's sister. She spoke excellent English, seemed to me a little like Lady Bracknell and quite as unnerving. She had worked in the American Embassy as a young woman, which was her post-war undoing, since she had survived, only to be imprisoned by mad, bad Stalin as a western spy. She survived that too. I got the impression that she could have survived almost anything.
I remember a son - Wojtek? -who had been working as an archaeologist, I think, in the Gobi desert. He sailed sand yachts and gave me a little bronze Tibetan Buddhist platter with a sun symbol etched into it. There was a scientist daughter-in-law who worked her socks off in the kitchen, and there were assorted teens and children, and other more remote family members.
The Kossak house was old and spacious and had survived the war relatively unscathed. There were polished wooden floors, lights, warmth, the inevitable pictures - and a tortoise that clip clopped about the floor, and tried to avoid being trampled underfoot.
My dear, sweet, loving Aunty Wanda was my saviour, especially on the days following Christmas Eve when we went on family visits. I don't think I have ever met anyone whom I loved so completely after such a short acquaintance. She carted me about with her, while I felt the need to protect this fragile little lady on Warsaw's rickety trams. We laughed a lot. We visited relatives of whom - at this distance in time - I have completely lost track. But I know that, like the book of Genesis, or those Gaelic clan recitations, I could see that they were intent on fitting me neatly into the family genealogy. I was Wladyslaw's granddaughter, Wanda's great niece, Julian's daughter, the one who had fetched up in England after the war and married an Englishwoman.
And I remember bigos. Every house offered bigos and every bowl was slightly different  - much as you'll be offered mince pies or Christmas cake here. It's good in reasonable quantities, but I also remember Andrzej who was brisk and sexy and very kind to an awkward young woman, who was a little in love with him, saying 'Poor, poor Kasia. Not MORE bigos!'
Only a few years ago, one of Teresa's friends wrote to tell me that she had died, and she sent me a book that Teresa had written about her family, including a chapter about her mother, Wanda Czerkawska. By that time, both my parents too were dead. This year, a Polish friend translated Wanda's chapter for me, which added another, even more intriguing dimension to what I already knew about my Polish family.
But you'll have to wait for my next book to find out more! 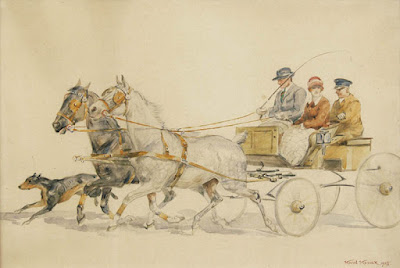