Northanger Abbey: Who Does John Thorpe Remind You Of? 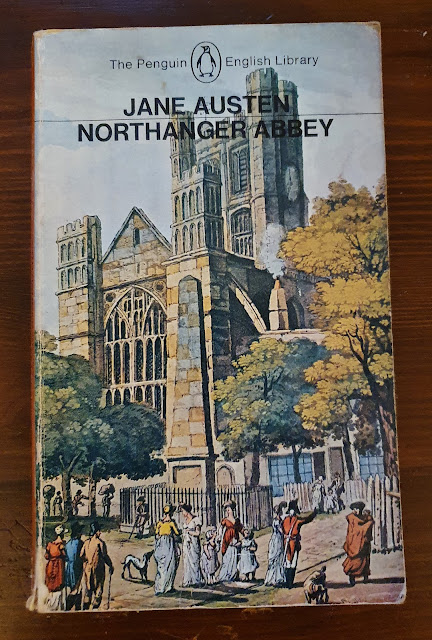 I've been rereading some Jane Austen. I do it every few years, because each time, I find something else to admire in her work. The older I've grown, the more I've come to appreciate her satire. Sometimes I'm blown away by the acid that seems to drip from her pen.

One of my favourite novels is Northanger Abbey - and I know that I'm probably in a minority here. So I'm rereading it all over again, and still finding it wonderfully scathing about women's role in the society in which she finds herself. It's all too easy for us to overlook just how revolutionary she was - especially at a time when an unmarried woman, from a less than wealthy family, was in an invidious position, the poor relation without an 'establishment' of her own.

'The advantages of natural folly in a beautiful girl have already been set forth ... I will only add, in justice to men, that though to the larger and more trifling part of the sex, imbecility in females is a great enhancement of their personal charms, there is a portion of them too reasonable and too well informed themselves to desire anything more in woman than ignorance.'

No wonder her (presumably male) bookseller sat on this book for ten years without publishing it!

One of the reasons why I love Northanger so much is that I know the Gothic novels she's satirising rather well. If you haven't read  - for example - the Mysteries of Udolpho (which I dramatised for radio) or the Castle of Otranto, it may be hard to see how amusing poor Catherine's situation really is. A bit like trying to appreciate Cold Comfort Farm if you've never come across all those novels depicting rural passions for an urban audience.

This time, though, something else occurred to me. Here is our heroine encountering the odious John Thorpe.

'Catherine listened with astonishment; she knew not how to reconcile two such very different accounts of the same thing; for she had not been brought up to understand the propensities of a rattle, not to know how many idle assertions and impudent falsehoods the excess of vanity will lead. Her own family were ... not in the habit of telling lies to increase their importance, or of asserting at one moment what they would contradict the next. She reflected on the affair for some time in much perplexity and was more than once on the point of requesting from Mr Thorpe a clearer insight into his real opinion on the subject; but she checked herself, because it appeared to her that he did not excel in giving those clearer insights in making those things plain which he had before made ambiguous. ...

'Little as Catherine was in the habit of judging for herself, and unfixed as were her general notions of what men ought to be, she could not entirely repress a doubt, while she bore with the effusions of his endless conceit, of his being altogether agreeable.'

I was irresistibly reminded of our Prime Minister. Is Boris Johnson a rattle?